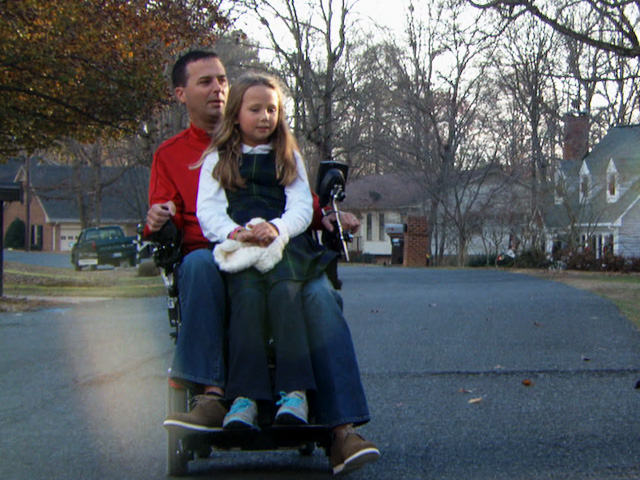 DURHAM, N.C. -- When we first met 42-year-old Chris Rosati, he had a thousand things on his bucket list -- and all of them were donuts.

It was part of this elaborate fantasy he crafted after he was diagnosed with ALS, Lou Gehrig's disease. He wanted to give away donuts at schools and parks, cancer wards and children's hospitals all over his hometown of Durham, N.C., for no other reason than to make people smile.

"Because if I can't impact people, then this whole thing is a waste," he said.

Since that first airing, Chris' wisdom has been quoted on church signs and celebrated on social media. A lot of people wanted to know how a dying man could be so full of life. And one of those people was Chris Rosati.

"I really wanted to know though: am I crazy?" he said.

Which brings us to part two of his story.

Chris is now working on a documentary he's tentatively titled "The Blessings of My Disease." He's interviewing other ALS patients, like Anne Fortier, to see if anyone else has found the same silver lining.

"The love that you feel for all the people in your life -- it overflows," Anne said.

Turns out Chris is not alone.

Bob Anderson can't even speak anymore, but even he can relate.

"I appreciate what I have so much every single day," Chris said.

Most of us do, too, but Chris thinks he's seeing something that we're not.

"I listen to the pitter-patter of my daughter's feet running down the hall," Chris said.

And he never would have noticed that before.

"It would have been more background," he said. "Now it's the focal point, and you've never heard anything so great."

You don't want his disease, but you sure do want what he's got. Which is why, in the year or so he has left, Chris promises to shed as much light as possible.

"I want to be able to articulate what I know," he says. "If I have enough time, I'll change the world."