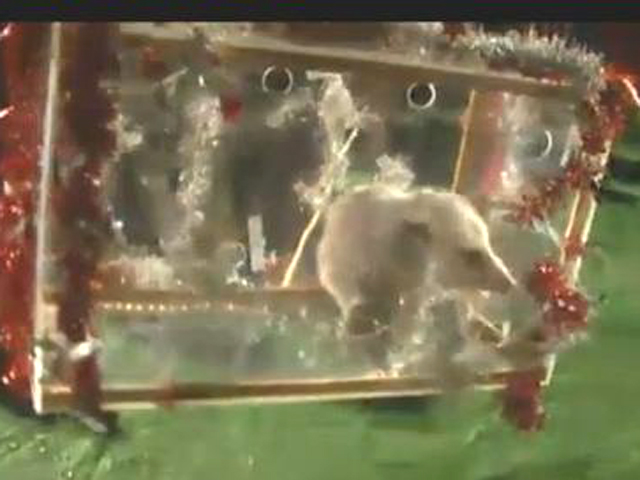 RALEIGH, N.C. - A North Carolina judge has decided he won't second-guess state wildlife regulators, who are allowing a mountain town's tradition of lowering a captured possum in a plastic box to continue this New Year's Eve.

Superior Court Judge Allen Baddour decided against a bid by the animal-welfare organization People for the Ethical Treatment of Animals (PETA) to block the annual Possum Drop in Brasstown next week.

The event held annually for two decades involves enclosing a live possum in a clear plastic box and lowering it gently to the ground much the way - well, sorta the same way - that New York City marks the New Year with the descent of a mirrored ball.

A PETA lawyer argued the lights, noise and crowd of people can wreck a possum's nerves and health even though the animal is later released.

"In her perception, she will be surrounded by predators," PETA lawyer Martina Bernstein said. "They will be all around her. She will smell them, she will still be able to hear them, she will know that they're there. And this is not a condition that a wild possum by nature can withstand without significant harm."

Attorneys for the state Wildlife Resources Commission, which issued a permit Friday allowing the organizer to capture the animal, argued that it couldn't deny a permit based on the possibility that the organizer won't live up to the required conditions, CBS affiliate WRAL reported. PETA had argued the organizer can't meet some of the permit's conditions, including that the captivity must be in the interests of the humane treatment of the animal.

The North Carolina General Assembly this year passed a law allowing licensed sportsmen to hold animals for display if it's done for "an annual, seasonal, or cultural event."

Which raises the question... in a world where possums rule, do they gently lower a human to the ground on New Year's Eve?