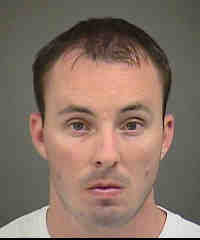 CHARLOTTE, N.C. A Charlotte police officer accused of shooting an unarmed man 10 times after the man was in a car crash over the weekend is scheduled for appearance in court on voluntary manslaughter charges Tuesday afternoon.

Officer Randall Kerrick fired 12 times at Jonathan A. Ferrell early Saturday after the 24-year-old was in a single-car wreck and sought help at a nearby house, police said.

Kerrick's first court appearance had been scheduled for Monday but was delayed. Officials did not say why.

On Monday, Ferrell's family said in their first public remarks in the case that the former Florida A&M University football player moved to Charlotte about a year ago to be with his fiancee and was working two jobs. He wanted to go back to school and eventually become an automotive engineer, they said.

"You took a piece of my heart that I can never put back," said Ferrell's mother, Georgia Ferrell, as she clutched a stuffed Winnie the Pooh doll her son loved as a child.

Also Monday, a family attorney and representatives of the NAACP questioned whether race played a role in the shooting of the black man by a white officer. Though there was praise for police for quickly filing charges, some said the shooting didn't surprise them, considering portrayals of black men in popular culture and previous instances of racially inflected violence.

"The officer is white, Mr. Ferrell is black," Ferrell family attorney Chris Chestnut said. "This might be more of a reflection of where we are as a country."

The encounter was set in motion around 2:30 a.m. Saturday when Ferrell's car ran off the entrance road to a sprawling suburban neighborhood that was carved out of farmland about a decade ago some 15 miles from downtown Charlotte. A sign near the crash site advertises a neighborhood watch meeting in a few days.

After crashing his car into trees, Ferrell kicked out the back window and headed up a hill to the first set of closely-clustered houses he could see. He then started "banging on the door viciously" of a home to attract attention, police Chief Rodney Monroe said.

The woman inside answered, thinking it was her husband coming home late from work. When she saw Ferrell, she shut the door and called police. Monroe said he didn't think the unarmed Ferrell made threats.

Officers responding to the breaking and entering call found Ferrell on a road that only leads to the neighborhood's pool. Ferrell ran toward the officers, who tried to stop him with a Taser. Police said he continued to run toward them when Kerrick shot him. Ferrell died at the scene.

Chestnut, who has spoken with police officials, said Kerrick didn't identify himself as a police officer.

A small pot of flowers and red balloons were placed on the spot. Orange spray paint was the only other indication of where Ferrell died.

Lance LoRusso, an attorney and former police officer, said it's unusual for a police officer to be charged so quickly after a shooting. He said there is generally a waiting period while investigators review the evidence.

"There are a couple of reasons why police take their time. First of all, it takes time to develop things like the toxicology report to determine what happened. You have to wait until daylight to reconstruct the crime scene. You have to interview all the people involved. And the officer is given the opportunity to decompress before making a statement," he said.

But police told CBS Charlotte affiliate WBTV, "The fact that Officer Kerrick discharged his weapon and that Mr. Ferrell was unarmed were some of the factors included in the decision to charge Officer Kerrick with voluntary manslaughter."

Police issued a statement saying evidence revealed Kerrick's use of force was excessive and fit the criteria for voluntary manslaughter, the station says, adding, "WBTV has learned that police consulted with prosecutors but it was the police department that decided to file charges. "

WBTV says police tell it that Kerrick was disciplined in December, suspended for a day for an undisclosed infraction.

Ferrell's mother said Kerrick had no business being a police officer if he couldn't react properly to a man who needed help.

"I truly forgive him. I pray for him. And I pray that he gets off the police force," Georgia Ferrell said.

His family painted a picture of a bright man with an "infectious smile" who was always there for his brothers and sisters. "He was a role model," said his brother, Frank. "He had so much love in his heart. And he was always concerned about his family."

"He had dreams of being an automotive engineer. He wanted to design a car from the very last bolt to the interior," his brother said.

He said he didn't know where his brother was going that night, or why he got into the accident. But he said his brother had never been in trouble before.

Several people in the neighborhood where Ferrell went after the crash refused to talk to a reporter Monday. A Charlotte-Mecklenburg Police car was in one driveway just up the hill from Ferrell's wreck. No one answered the door at that home.

Ferrell was at least the sixth person to be shot by Charlotte-Mecklenburg officers since the start of 2012. Four of them have died.

Charlotte police investigate their own officers involved in shootings. The State Bureau of Investigation can step in if requested, but they haven't been asked to do so in any recent officer-involved shootings.

In the other shootings, prosecutors decided not to charge the officers involved and an independent panel of citizens that investigates the police ruled the shootings were justified.

The shooting needs to bring more scrutiny to the Citizens Review Board so the group simply doesn't assume police officers are always right, said Kojo Nantambu, president of the Charlotte-Mecklenburg Branch of the National Association for the Advancement of Colored People.

"No police department is perfect," Nantambu said. "But every time that group investigates, they find nothing wrong."