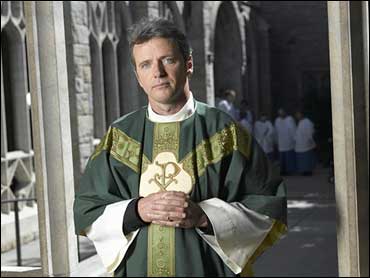 The last chapter of the controversial religious drama "The Book of Daniel" has been written at NBC.

Although the network stopped short of saying the low-rated show was canceled, a spokeswoman said Tuesday it has been dropped from the schedule.

The series, which starred Aidan Quinn as an Episcopalian priest with a pill habit who holds regular conversations with Jesus, has a promiscuous son and a daughter who deals marijuana, proved better at drawing criticism than viewers.

Conservative Christian groups condemned the depiction of Jesus as blasphemous, accusing the writers of portraying Christ as tolerant of sin in talks with the priest. Seven NBC affiliates refused to air it, including WSMV-TV in Nashville, Tenn.

"The Book of Daniel" drew an audience of 6.9 million on its first night. By its fourth airing, the number had dipped to 5.8 million viewers.

NBC's move was lauded by the Tupelo, Miss.-based American Family Association, which had condemned the show as a sign of what it called the broadcaster's "anti-Christian bigotry."

The group, along with James Dobson's Focus on the Family, asked supporters to lobby their local NBC affiliates to refuse to carry it. In an article posted on its Web site, the AFA credited viewer complaints for forcing the network's hand.

"This shows the average American that he doesn't have to simply sit back and take the trash being offered on TV, but he can get involved and fight back with his pocketbook," "AFA founder and chairman Donald E. Wildmon said in the posting.

The show's creator and executive producer, Jack Kenny, has said his goal was to depict how "humor and grace" help a flawed man struggle with his faith and family. He said the writers never meant to mock religion or Jesus.

One dead, dozens injured as festival stage collapses in Spain
Thanks for reading CBS NEWS.
Create your free account or log in
for more features.
View CBS News In
CBS News App Open
Chrome Safari Continue
Be the first to know
Get browser notifications for breaking news, live events, and exclusive reporting.