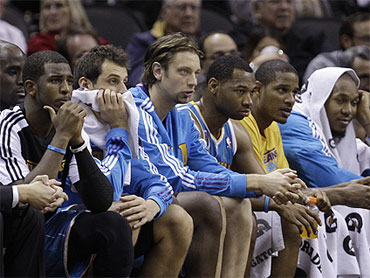 The NBA's decision to buy the New Orleans Hornets gives Louisiana the best opportunity to hold onto the franchise that moved there in 2002, league commissioner David Stern said Monday.

Stern confirmed that the league is proceeding with a plan to buy the club from majority owner George Shinn and minority partner Gary Chouest, making the Hornets the first NBA-owned team.

Shinn has been trying since last spring to sell the team to Chouest, but those negotiations had stalled, and Stern said Shinn's urgency to sell his shares was increasing because he was accumulating debt at a rate he could not sustain.

If the NBA had done nothing, Stern said, Shinn may have been inclined to take the next good offer he got, even if it came from a buyer that planned to move the team.

The NBA has "the luxury of time to make these decisions," Stern said. "So frankly, that was one of the best reasons for us to step forward, so that the luxury of time was on our side, that there didn't have to be made a long-term decision on a very short framework with certain pressures. And we think we've eliminated the pressure."

However, Stern also made it clear that Louisiana politicians should be prepared to revisit the Hornets' lease of the state-owned New Orleans Arena and the level of taxpayer-funded inducements the club may receive in the future.

Stern made an oblique reference to the NFL's New Orleans Saints, who since 2001 have negotiated inducements worth hundreds of millions of dollars. A recent deal even involved Saints owner Tom Benson buying a downtown high-rise with a guarantee that state agencies would lease office space at an above-market rate.

"Whether you call it a lease or some additional arrangements that I think the state is probably familiar with in the context of a sport whose ball is shaped differently than ours, I think that the state will be a party along with the team and possibly the city to a broader deal," Stern said. "It's a fair issue, and the governor knows we're coming."

Louisiana, like many states, is dealing with enormous budget cuts during the current economic recession. Gov. Bobby Jindal pledged to work with the NBA, but only within the state's limits.

"We have been talking to the team, the NBA, and potential buyers for some time now about keeping the Hornets in New Orleans," said Jindal spokesman Kyle Plotkin. "We think the Hornets are a strong fit for New Orleans and we have discussed various creative ideas to keep them in Louisiana. At the same time, we realize the state is facing budget challenges and we are not going to do anything that jeopardizes funding for higher education and health care."

The Hornets' current lease, which already channels most arena advertising, parking and concession revenues to the team and leaves the state little more than what it needs for operating expenses, runs through 2014.

However, the lease also includes an attendance clause that allows the Hornets to break the lease early if average attendance falls below 14,735 during a two-year period.

Through 10 home games, average attendance this season has been 13,865, raising the possibility that next two-year attendance benchmark could be missed by late January.

If that happened, the club would have to notify the state of its intent to end the lease by March 31, 2011, but Stern stressed the NBA would not rush to get out of its lease.

"The lease does give some flexibility if it's determined that the future is not in Louisiana, but we expect to exhaust what the future would look like in Louisiana," Stern said. "Frankly, that's one of the reasons why we stepped in and made the purchase."

Stern did not say what the NBA is paying for the club but did say the franchise "has been valued in excess of $300 million."

The sale still must be approved by the NBA's Board of Governors, which likely will vote on the matter next week. Stern said he expects approval by an "overwhelming" majority.

Stern also confirmed the league has recruited New Orleans native Jac Sperling to be the NBA's administrator of the team until it can be sold to a more permanent owner. Sperling is a sports attorney and the vice chairman of the NHL's Minnesota Wild.

While the league is buying Chouest out for now, Stern said there was "nothing to preclude" Chouest from coming back to the table. Later, Stern referred to Chouest as "a potential future owner" and "a good friend of mine and the NBA's."

Chouest has declined to discuss specifics of why he stepped back after it appeared last May he was close to buying the club. Stern said Chouest never mentioned having any concerns about a potential NBA work stoppage.

Chouest is in the offshore oil and gas business, which has a cloudy future due to a moratorium on deep water drilling following the BP oil spill in the Gulf of Mexico.

Stern also noted that the NBA could hold onto the Hornets until after the league and the players' union have negotiated a new collective bargaining agreement that is expected to promote more revenue sharing. Stern said that could make small-market teams like New Orleans a more attractive investment.

Shinn founded the Hornets in 1988 in Charlotte and moved them to New Orleans in 2002. After Hurricane Katrina damaged much of New Orleans, the Hornets spent two season playing in Oklahoma City from 2005-07 before moving back to the Big Easy.

The Hornets are 13-7 under new coach Monty Williams and new general manager Dell Demps. New Orleans got off to a surprising 11-1 start, but has lost six of eight games.

Hornets President Hugh Weber will remain in his current role overseeing the day-to-day operations of the team.

"Our purpose and resolve will always be to build the Hornets into a championship contender," Weber said.