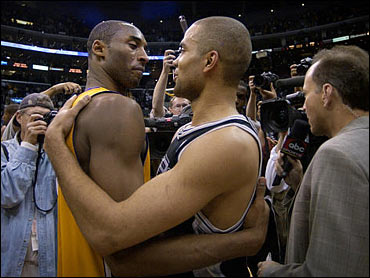 Kobe Bryant and Derek Fisher left the court in tears.

It was a somber scene at Staples Center, where the Los Angeles Lakers' three-year championship reign came to a resounding end Thursday night.

"It hurts. I haven't had this feeling in a long time," O'Neal said after the San Antonio Spurs beat the Lakers 110-82 to win the Western Conference semifinal series 4-2. "But it's reality, it's life, so you have to suck it up and move on.

"The good thing about sports is there's always next year. We apologize to our fans for a so-so year, but we'll be back next year for a whole new run."

Two-time MVP Tim Duncan and Tony Parker were a much more effective 1-2 punch than O'Neal and Bryant. Duncan had 37 points and 16 rebounds and Parker scored 27 points, while O'Neal had 31 points and 10 rebounds and Bryant added 20 points.

The Spurs advanced to the Western Conference finals, where they'll face Dallas or Sacramento, beginning Monday night in San Antonio. The Kings beat the Mavericks 115-109 Thursday night to force a seventh game Saturday night in Dallas.

Play resumes Friday night in the Eastern Conference, with Detroit taking a 3-2 lead into its game at Philadelphia. The series winner will play New Jersey in the conference finals.

"For three years now, they've just dominated everybody," said San Antonio's David Robinson, playing his final season. "It feels good to break through that and go on to the next level."

The Lakers were trying to join the Boston Celtics as the only NBA teams to win more than three straight titles. The Celtics won eight in a row from 1959-66.

The Lakers had won 13 straight playoff series under Jackson and were 4-0 when facing elimination since he became their coach.

They entered this game tired and banged up, and that was evident as the Spurs scored 44 of the game's final 62 points to turn a tenuous two-point lead into a 28-point blowout.

Parker, who turns 21 Saturday, drove the length of the court to make an uncontested layup with 1.2 seconds left in the third quarter for a 78-69 lead.

That was a sign of things to come. By the time the fourth quarter was half over, the Spurs led by 20 points.

The Lakers rallied from a 25-point deficit late in the third quarter of Game 5 and trailed by only two when Horry's 3-pointer rattled in-and-out with three seconds left, enabling the Spurs to escape with a 96-94 decision.

The Spurs weren't going to let a lead slip away again - even on the Lakers' court.

A playoff hero on several occasions in his career, Horry was devastated.

"Personally, I haven't felt this low in a long time - since the death of my grandmother," he said. "So this is pretty low. You never expect to go out like this - by 20-plus points on your home court. It was like, all of a sudden, everything just went wrong.

"I'm taking it extremely personally. I felt like I let everybody in this organization down. I just flat-out stunk. That's all you can say."

Horry shot 11-of-43 in the series, missing all 18 shots he attempted from 3-point range.

The Spurs were the last team to eliminate the Lakers from the playoffs, sweeping them in the 1999 conference semifinals en route to their only championship.

Jackson-coached teams had won a record 25 consecutive playoff series dating to 1996, and his nine titles are tied for the most in NBA history with former Boston coach Red Auerbach.

"They left no doubt about the fact that they were the better team in this series," said Jackson, who underwent an angioplasty to unblock an artery last Saturday. "We're severely disappointed we couldn't make a run for the championship.

"We've had a great run, we've had great play. We've gotten a little bit older, we had some injuries, we had a tough year."

The Lakers overcame an 11-19 start to finish 50-32 and were seeded fifth in the West. The Spurs (60-22) have homecourt advantage throughout the playoffs.

"We finally played the defense in the second half that got us to this point," San Antonio coach Gregg Popovich said. "I'm just thrilled the guys played so well."

Regarding the Lakers, Popovich said: "I've been amazed at what they've done. They've been great, they are great."