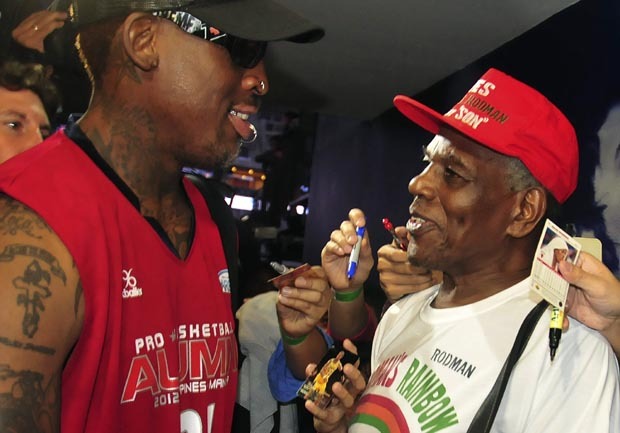 Philander Rodman Jr., who has acknowledged fathering 29 children by 16 mothers, says he was happy and surprised that his son agreed to meet him late Wednesday. He tried to meet the basketball Hall of Famer during another game in Manila in 2006.

"It was great," he said Thursday of the first time he held his son's hands since they last met in December 1969.

"I've been trying to meet him for years. And then last night, boom, I met him. I was really, really happy and very surprised," he told The Associated Press.

Philander, who has been living in the Philippines for nearly 50 years, said he wanted to explain to his son that he didn't abandon his family in the United States, but they only had time for greetings and handshakes.

He said he spent only about three minutes with his son, who was also busy signing autographs.

"I really, really felt good," he said. "It's the beginning of something new."

He gave his number to his son who promised to call.

He said his son did not even want to talk about him six years ago, but he was encouraged to try again to meet him after Tuesday's press conference where the former Pistons and Bulls star invited him to watch Wednesday's game.

"I don't hate the guy that brought me into this world," Dennis Rodman told reporters. "The fact is, if I saw him, I'll just tell him, 'You know, you're a friend of mine.'"

During a break, with seconds left to the end of the game, Dennis Rodman grabbed a microphone, acknowledged his father's presence and pointed to him in the arena.

The crowd applauded as the elder Rodman stood up wearing a red baseball cap that said "Yes, Dennis Rodman is my son."

He said his restaurant menu includes burgers with red, yellow and green colored buns and fries, colors associated with his flamboyant son.