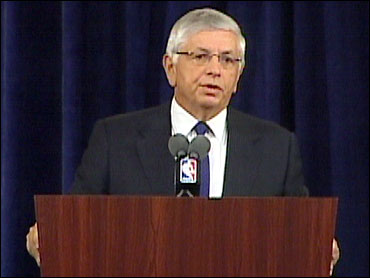 NBA commissioner David Stern said he believed the betting scandal that has rocked the league won't go beyond the allegations against the one referee who resigned.

Stern also called it the "worst situation" he's experienced in his 23 years at the helm.

"Mr. Donaghy is the only referee alleged to have bet on NBA games and disclosed confidential information to others," Stern said Tuesday, referring to Tim Donaghy during a packed news conference. "I'll say it again, I understand this is an isolated case."

Although no charges have been filed, Stern confirmed accusations that Donaghy bet on NBA games the last two seasons, adds Keteyian, including some in which he worked, and that he provided inside information about games so other gamblers could profit.

Donaghy is expected to turn himself in at U.S. District Court in Brooklyn later this week or early next week, according to a person familiar with the investigation.

A subdued Stern said he felt betrayed on behalf of NBA fans in his first public comments since news of the investigation broke.

"The current state of what we're dealing with is betting and providing information," Stern said. "I don't know of any charges yet or any discussions yet as to fixing of games."

Stern called it the "worst situation I've every experienced either as fan of the NBA, a lawyer for the NBA or commissioner of the NBA."

Donaghy's lawyer has informed the NBA that the former referee is considering agreeing to a plea agreement.

The FBI first contacted the NBA on June 20 to talk about a referee alleged to be gambling on games, and the two sides met on June 21, Stern said. Donaghy resigned July 9.

"Suffice to say, we would have liked to have terminated him earlier, but our understanding was the investigation would best be aided if we did not terminate Mr. Donaghy," Stern said.

The June call from the FBI was not the first time Donaghy faced gambling allegations.

In January 2005, Stern said, the NBA investigated a dispute between Donaghy and a West Chester, Pa., neighbor. During the investigation, there were allegations that Donaghy was gambling — not on sports — in Atlantic City. Stern said the league contacted every casino in Atlantic City and Las Vegas and found no evidence of gambling by Donaghy.

Donaghy wasn't allowed to officiate the second round of the 2005 playoffs because of the incident with his neighbor, Stern said.

Authorities are examining whether Donaghy made calls to affect the point spread in games on which he or associates had wagered thousands of dollars during the past two seasons, according to a law enforcement official. The referee had a gambling problem and was approached by low-level mob associates through an acquaintance, the official said.

"We take our obligation to fans in this matter very seriously," Stern said. "I can stand here today and pledge that we will do every look back possible to analyze our processes and seek the best advice possible to see if there are changes that should be made and procedures that should be implemented to continue to assure fans we're doing the best we possibly can."

Those familiar with the investigation and the law enforcement official spoke on condition of anonymity because they weren't authorized to discuss the ongoing probe.

Stern said league officials had been following the officiating scandal that rocked a German soccer league.

"My reaction is I can't believe it's happening to us," Stern said.

Stern said he wasn't authorized to discuss how Donaghy bet on games, but he believes it wasn't through Las Vegas.

Stern also outlined the NBA's process of evaluating the officiating of every game, but conceded it had been focused more on the quality of referees' performances than searching for possible wrongdoing. That will probably change, he said.

The league's background checks of referees, including financial information, didn't turn up anything suspicious on Donaghy, Stern said. However, he said the league hasn't had a chance to closely look at all the games Donaghy called because of the initial need to keep the investigation quiet.