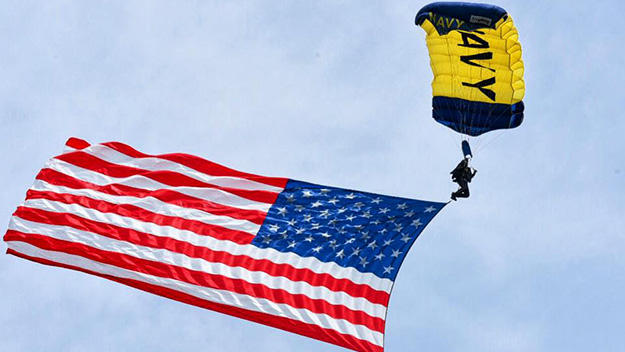 JERSEY CITY, N.J. -- In the shadow of the Statue of Liberty, a Navy SEAL team member fell to his death Sunday after his parachute failed to open during a Fleet Week demonstration over the Hudson River, an incident one shocked witness called "very disturbing."

The accident occurred a few minutes after noon near Liberty State Park, a large New Jersey park across from Manhattan where thousands of people a year catch ferries to the nearby national treasure.

A witness, Bjoern Kils, told CBS New York he was on his boat about 100 feet away when other members of the Leap Frogs team landed safely.

"As they were landing out of the corner of my eye, I saw a splash and I heard a very distinct thump," he said. "It's terrible; very disturbing; very sad."

The parachutist, whose identity was not immediately released, was a member of an elite Navy parachute team called the Leap Frogs, a Navy spokesman said. The cause of the parachute malfunction is under investigation.

"I'm terribly saddened," said Nancy Malinowski, a Cranford, New Jersey, resident who was in Liberty State Park and knew something had gone wrong when she saw a parachute with nobody attached to it descend behind a building.

"I don't think 90 percent of the people there were aware," Malinowski said, describing a gathering in the park that included food trucks, a Navy band and lots of small children. "Everybody was out there to support the military."

She said the parachutist was among four who drifted down from high in the sky from two helicopters. One of the parachutists descended with a large American flag.

Malinowski said she learned later in the day from a firefighter that the parachutist had died.

"It was devastating. We felt terrible," she said. "We figured it had to be a young man trying to do a little P.R. for the service. On Memorial Day weekend. It couldn't have been worse."

In a release, the Navy said the parachutist was rescued immediately from the water by U.S. Coast Guard personnel who were standing by in vessels to support the aerial demonstration that featured the coordinated parachute jump. Local fire department personnel who were also on standby responded as well. The Navy said the parachutist was pronounced dead at Jersey City Medical Center at 1:10 p.m.

The Navy said the identity of the victim would be released after family notifications were completed.

"Our hearts and prayers go out to his family, and I ask for all of your prayers for the Navy SEAL community who lost a true patriot today," said Rear Adm. Jack Scorby, commander of the Navy Region Mid-Atlantic.

Spectators were left shaken and praying for the victim's family.

"Considering I have a son in the military, you going for some that you know, somebody's got to report that back to their family, and it's horrible," spectator Juan Marin told CBS New York.

In a Facebook post Sunday morning, the Leap Frogs promoted the jump with a photo of a team member descending in a parachute during an earlier jump, an American flag attached to him, saying: "New York City look to the skies at 12:00. We'll be jumping into Liberty State Park today for Memorial Day Weekend and in celebration of Navy Fleet Week."

The accident came nearly two years after a U.S. Army skydiver, who had served five tours of duty in Iraq and Afghanistan, died from injuries suffered in a midair collision with a Navy jumper during a stunt at the Chicago Air & Water Show that combined the Army Gold Knights and the Navy Leap Frogs parachute teams. The Aug. 16, 2015, accident claimed the life of 32-year-old Master Sgt. Corey Hood, of Cincinnati.

According to the Leap Frogs website, the team has performed every month this year, including at baseball home openers in Philadelphia and San Diego last month and at the Winter X Games in Aspen, Colorado, in January. In June, it is scheduled to perform at Sail Boston 2017 and at Navy Week in Pittsburgh. Stops later this summer include Minneapolis, Chicago and Salt Lake City, Utah.