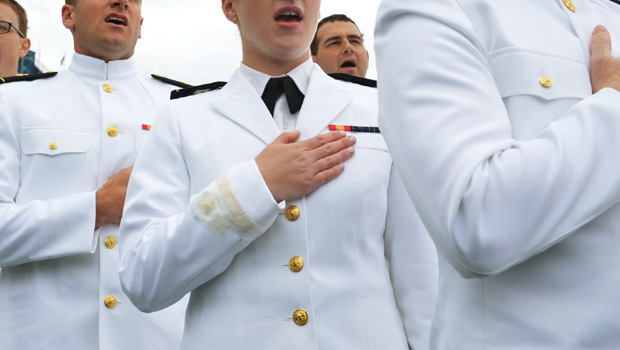 (AP) WASHINGTON - A female U.S. Naval Academy midshipman asked one of three former football players accused of sexually assaulting her to tell Navy investigators nothing happened, according to a recording of a telephone call played at a military hearing Thursday.

The woman told the accused midshipman she didn't want the investigation to go anywhere.

"I really, really don't," the woman said in the call, which was played at a hearing being held to determine whether the three former football players should face a court-martial.

Midshipman Josh Tate, one of the three accused, responded that her request "ain't cool."

The woman said at a hearing at the Washington Navy Yard that it was wrong to try to obstruct the investigation.

"I understand what I did was wrong," she said during the hearing.

The Associated Press generally does not name alleged victims of sexual assault.

The tape was played during cross-examination by an attorney for Midshipman Tra'ves Bush. Bush also is accused of sexually assaulting the woman.

The cross-examination took place a day after the woman testified about her limited recollections of a party in April 2012 at a house off campus in Annapolis, where Navy football players held a crowded party with men dressed in togas and women dressed in yoga pants.

The woman has testified she had been drinking heavily.

The woman, now a 21-year-old senior, has testified she has no memory of having sex with anyone that night. She had a previous sexual relationship with Bush.

She testified Wednesday she awoke at the house the next morning with a sore back. She also said she had consensual sex with a different football player that morning at the house, while there were two other people in the room.

The woman has testified that she initially did not want an investigation because she was scared and unsure of what happened.

She also said she didn't want anyone to get in trouble.

She testified Thursday she decided to cooperate with investigators months later after a mentor advised her to do so.

Under cross-examination by Andrew Weinstein, Bush's attorney, the woman testified she did not consider the men to be criminals months after the party. However, she has said she does not know what happened after she had too much to drink.

"I just want justice to be upheld and for the truth to be out," she said.

The case has drawn attention as the White House, Congress and the Pentagon have been focusing on the issue of sexual assault after a string of cases in the military this year.