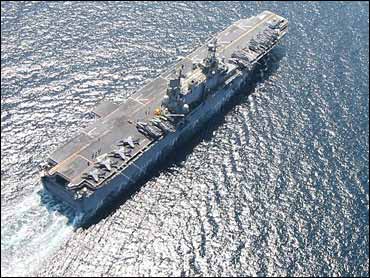 The Navy has stopped searching the USS Nassau for a missing sailor although crew members continue to keep an eye out for him, a Navy spokesman said Tuesday.

"There's not an active search where we're going space by space but everyone knows the sailor is missing and they're on the lookout," Second Fleet spokesman Cmdr. Ernest Duplessis said. "Now it's just a matter of being alert and understanding that he is missing."

A search of the Atlantic Ocean and the 833-foot amphibious assault ship began Sunday morning when Petty Officer 1st Class Shaun Dale did not appear at roll call.

The sea part of the search ended Monday and the ship then resumed course for North Carolina, where it dropped off its contingent of Marines at Camp Lejeune. It is scheduled to return to its home port in Norfolk on Thursday.

Williams, of Philadelphia, tripped and fell from the Nassau on Friday while chasing a football while the ship was about 900 miles off the Virginia coast, officials said. The Navy ended its search Sunday without finding Williams' body.

Williams' mother and brother said Tuesday they accepted the Navy's explanation, but they wanted to meet the ship in Norfolk to talk to officials.

"We wanted to sit down with some of the people who were actually there so we can hear their side of the story ... people who actually witnessed the incident," brother Curtis Williams told CBS' "The Early Show."

He said he thought it was strange that two sailors would go missing within such a short period of time. "We still have a lot of questions about the exact details about everything," he said.

Betty Williams said she believed the Navy tried to rescue her son.

According to statistics from the Naval Safety Center, four sailors died in what the service calls "mishaps afloat" between October and May 21. During the previous federal fiscal year, five sailors died in such circumstances.