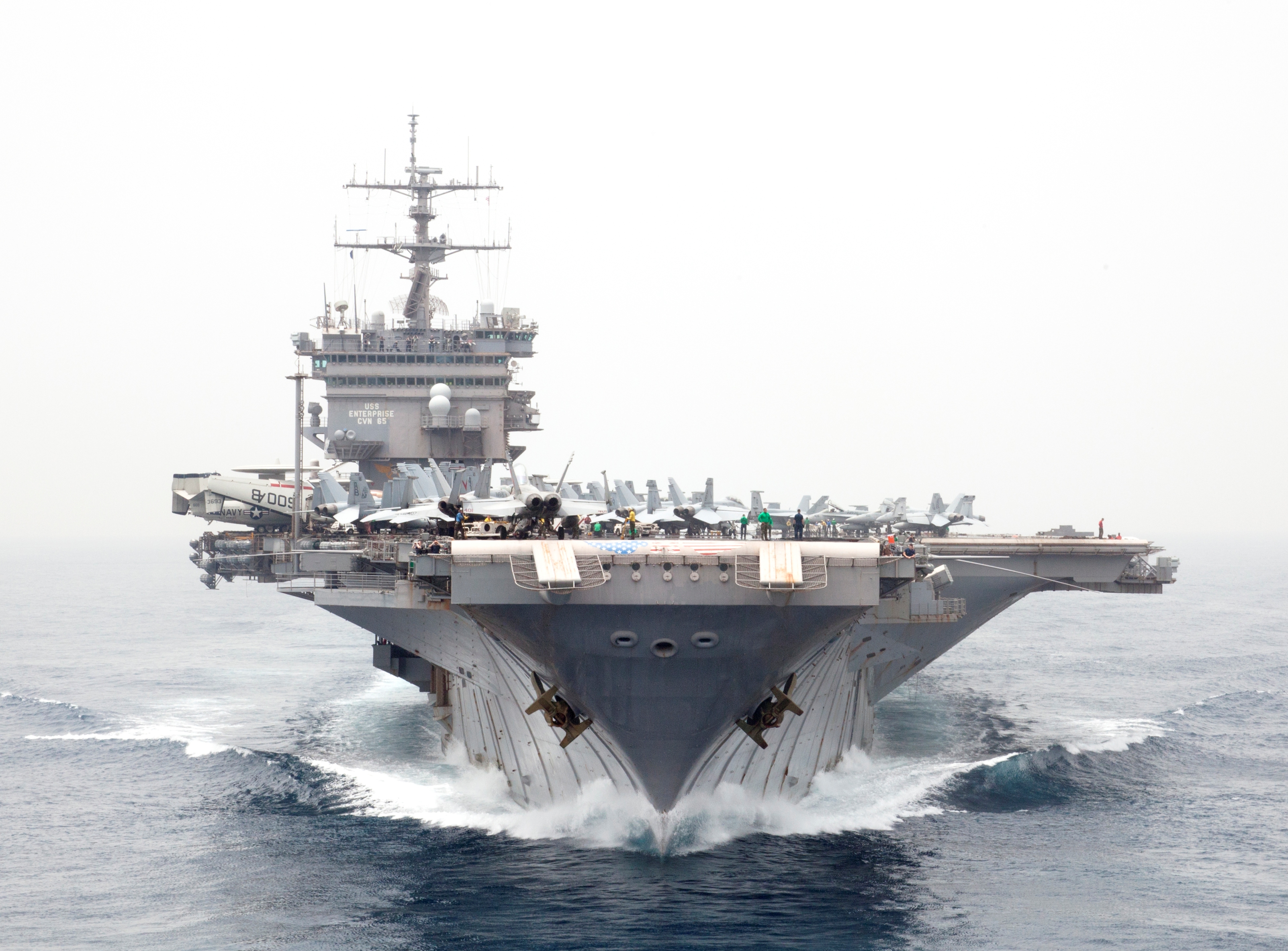 (CBS/AP) DUBAI, United Arab Emirates - The U.S. Navy said Monday it has deployed a second aircraft carrier to the Persian Gulf region amid rising tensions with Iran over its nuclear program.

The deployment of the nuclear-powered USS Enterprise along the Abraham Lincoln carrier strike group marks only the fourth time in the past decade that the Navy has had two aircraft carriers operating at the same time in the Persian Gulf and the Arabian Sea, said Cmdr. Amy Derrick-Frost of the Bahrain-based 5th Fleet.

The two carriers will support the American military operations in Afghanistan and anti-piracy efforts off Somalia's coast and in the Gulf of Aden, said Derrick-Frost.

The warships also patrol the Gulf's strategic oil routes that Iran has threatened to shut down in retaliation for economic sanctions.

The deployment of the second aircraft carrier is "routine and not specific to any threat," Derrick-Frost added. She did say how long the Navy will keep the increased military presence in region.

It was in June 2010 that the U.S. had two carriers operating in the region. Before then, the carriers were deployed in March 2003 during the U.S.-led invasion of Iraq and in February 2007 in support of wars in Iraq and Afghanistan.

The Enterprise is based in Norfolk, Va. It is the Navy's first nuclear-powered aircraft carrier that is now on its last mission.

The Enterprise was commissioned in November 1961. The carrier is scheduled to be deactivated this fall.

Meanwhile, Iran has floated a possible compromise regarding its nuclear program ahead of international talks aimed at diffusing ongoing tension between Tehran and the West.

Iran's nuclear chief signaled Tehran's envoys may offer at the talks to eventually stop producing its most highly enriched uranium, while not totally abandoning its ability to make nuclear fuel.

The proposal outlined late Sunday seeks to directly address one of the potential main issues in the talks scheduled to begin Friday between Iran and the five permanent Security Council members plus Germany.

The U.S. and others have raised serious concerns about Iran's production and stockpile of uranium enriched to 20 percent, which could be turned into weapons-grade strength in a matter of months.

But the proposal described by Iran's nuclear chief, Fereidoun Abbasi, may not go far enough to satisfy the West because it would leave the higher enriched uranium still in Tehran's hands rather than transferred outside the country.

Abbasi said Tehran could stop its production of 20 percent enriched uranium needed for a research reactor, and continue enriching uranium to lower levels for power generation.

The enrichment issue lies at the core of the dispute between Iran and the West, which fears Tehran is seeking an atomic weapon — a charge the country denies, insisting its uranium program is for peaceful purposes only.

Uranium has to be enriched to more than 90 percent to be used for a nuclear weapon, but with Iran enriching uranium to 20 percent levels, there are concerns it has come a step closer to nuclear weapons capability.

Abbasi said production of uranium enriched up to 20 percent is not part of the nation's long-term program — beyond amounts needed for its research reactor in Tehran — and insisted that Iran "doesn't need" to enrich beyond the 20 percent levels.

"The job is being carried out based on need," he said. "When the need is met, we will decrease production and it is even possible to completely reverse to only 3.5 percent" enrichment levels.

It was not immediately clear whether Abbasi's comments reflect what will be Tehran's official stance when the negotiations begin in Istanbul more than 14 months after the last round collapsed.

Meanwhile, Foreign Minister Ali Akbar Salehi was quoted on the Iranian parliament's website on Monday as saying he hopes for some progress in the upcoming talks but warned Iran would not accept any preconditions.

"We will honestly try to have the two sides conclude with a win-win situation in which Iran achieves its rights while removing concerns of five-plus-one group," he said. "But imposing any conditions before the talks would be meaningless."

Iran insists it has full rights under the Nuclear Non-Proliferation treaty to enrich uranium to create nuclear fuel and says it only seeks enrichment levels to power reactors, but the U.S. and others worry that the same process can be used to make weapons-grade material.

Ahead of Istanbul, there are signs Tehran is confident it may have beaten back the toughest Western demands for a complete halt to uranium enrichment and that some bargaining room has now been opened for new proposals.

Abbasi's remarks follow a bravado last week from Iranian lawmaker Gholam Reza Mesbahi Moghadam, who claimed Tehran has the know-how and the capability to produce a nuclear weapon but would never do so.

Moghadam also said that Iran has the means to produce 90-plus percent enrichment, though he did not elaborate

After a protracted flap over the venue for the talks, Iranian state TV reported Sunday that both sides had agreed on Istanbul. It said a second round would be held in Baghdad but that its timing would be decided during the meeting in Turkey.