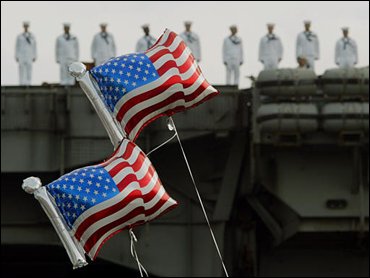 More than 10,000 people welcomed sailors from the USS Abraham Lincoln back to its homeport of Everett, Wash., reported The Early Show national correspondent Hattie Kauffman.

And by tradition, sailors whose wives gave birth while they were away were the first off the ship. The very first sailor to be greeted by family was Machinists Mate Juan Angel, otherwise known as "Candice's husband."

Candice Angel runs her house like a tight ship. She helped her children — Hannah, Kobe and, the newest arrival, Angelica — get ready for the day their father returned from almost 10 months at sea on active duty.

Angelica is nine months old and her father had yet to see her. Kobe was Angelica's age when he last saw Juan Angel before he went to sea.

While the USS Lincoln was at sea, launching combat sorties to Iraq, 150 babies were born to Navy wives back home.

Kristi Norgard gave birth to a child while her husband was also aboard the USS Abraham Lincoln.

"It's his first [baby] too," says Kristi. "I'm so excited and nervous, and everything all together. I just don't know what to do."

Meghann Middy's husband was one of those aboard the USS Abraham Lincoln to shake President Bush's hand when he boarded the aircraft carrier.

"He said he cried … because it was really special to him," says Meghann. "It made him realize what he did was very important."

The three women where anxious and spent the weekend cleaning their houses and cars — anticipating what they will talk or, like some married couples, argue about once they see their spouses again.

They all laughed when they thought about handing over the keys to the car or giving over the checkbook to let their husband balance it. They don't see it happening anytime soon.

Meghann says she is looking most forward to hugging her husband.

"Our son has had a real, real hard time," says Meghann. "It's hard to not sit there and cry with him when he cries for daddy."

"When it came time to push [in the delivery room], I just started crying because I wanted him to be there," says Monique Gonzalez. "I was supposed to be holding his hand."

Angelica Angel was born the day after the Lincoln deployed and her father will finally meet her, 290 days later.

That is why Juan Angel was the first off the ship. He is the father who has been away the longest from a newborn baby.