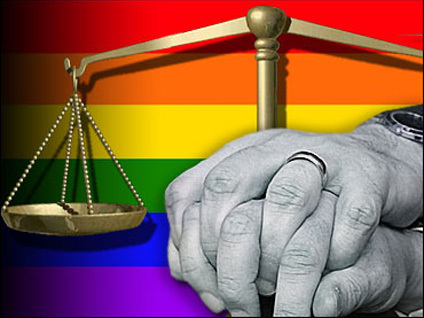 WASHINGTON — Navy chaplains will be trained about their ability to perform same-sex civil marriage ceremonies under new guidance that would take effect should the Defense Department move to recognize openly gay military service.

Navy officials said Monday that they updated the training after questions came up about civil ceremonies for gay couples. Military training to apply the new law allowing gays to serve openly began early this year and is expected to be complete by midsummer.

In earlier training guidelines issued by the Defense Department and the military services, same-sex marriage ceremonies were not mentioned, and therefore not explicitly prohibited.

Pentagon spokeswoman Eileen Lainez said Monday that the federal Defense of Marriage Act does not restrict the types of ceremonies a chaplain may perform in a chapel on a military base. The military would not compel chaplains to perform a same-sex marriage if it would be against their religious beliefs.

The Pentagon has been moving carefully to implement the repeal of the 17-year-old ban on openly gay troops. Under the law passed and signed by the president late last December, final implementation will go into effect 60 days after the president and his senior defense advisers certify that lifting the ban will not adversely affect troops' ability to fight.

Defense Secretary Robert Gates has asked for updates every two weeks, and so far defense officials have said there have been no reported problems.

The Navy ceremonies would be allowed at military facilities such as chapel and catering centers, but only in states that already recognize same-sex unions.

And, even if a marriage were to be performed, same-sex partners would not get any health, housing or other benefits that are provided to married couples involving a man and woman.

The Air Force and Army do not include discussion of same-sex marriage ceremonies in their training. The Air Force said it is aware of the issue and officials are reviewing it to determine if a change in the training is needed.

Under Pentagon guidelines, chaplains and other key military leaders were among the first tier of service members to be trained about the new law. Much of that instruction has been completed, so the Navy will send out updates to include the marriage ceremony provision.

Under the military's "don't ask, don't tell" policy, service members face dismissal if they reveal they are gay.