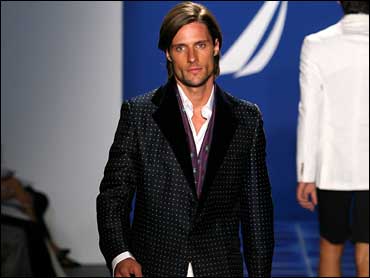 Nautica launched New York Fashion Week on Wednesday morning with a potential debate: Will hemlines be a relevant issue to men next spring?

Many of the crisp twill pants were worn just above the ankle and the shorts hit mid-thigh, shorter than Bermudas but longer than athletic shorts.

Even the one classic three-piece suit, done in a navy pinstripe, had a shorter-than-average hem. But what really caught the eye was the linen- banded collar shirt worn underneath that helped this handsome outfit precisely straddle a warm-weather casual look and business-appropriate refinement.

However, dressy outfits were far and few between. Swimsuits dominated the collection - the brand name is Nautica, after all - and those mostly hit the knee like the board shorts the surfers wear.

But the overall look was more sailor than surfer - most likely a European sailor at that.

The colors were American - red, white and blue and pops of yellow and silver - but the fitted striped T-shirts and colorful scarves and pocket squares had flair and flamboyance.

Or maybe the company was thinking of those men who prefer to hang by the pool, considering the actual runway was a series of reflective blue tiles and several of the models came out in cushy terry robes over their outfits.

New York Fashion Week lasts eight days, previewing the spring-summer looks for fashion editors, retail buyers and stylists. There are only a handful of menswear labels on the schedule, with most of the attention on womenswear.