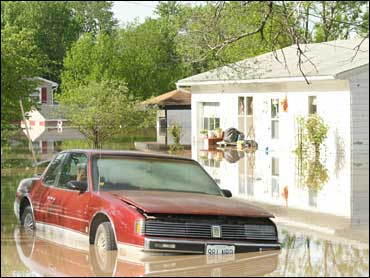 Nature's fury made life miserable from one end of the United States to the other, with people forced out of their homes by wildfires near both coasts and the Canadian border and by major flooding in the Midwest.

And although the calendar still said spring, the first named storm of the year was whipping up surf on beaches along the southeastern coast.

However, it was not quite a day for the record books.

"It's a major flood," National Weather Service meteorologist Suzanne Fortin said Wednesday of the flooding in Missouri. "It won't be a record breaker, but it will be in the top three."

But in southern Georgia a three-week-old fire had become that state's biggest in five decades after charring 167 square miles of forest and swamp.

Smoke-filled air created a burning smell and a dusting of ashes that coated cars and buildings through much of Florida and southeastern Georgia (read more). The haze over most of Florida closed several highways and sent people with breathing problems indoors.

The flooding was produced by the drenching weekend thunderstorms across the Plains states that also devastated Greensburg, Kansas. In addition to 11 tornado deaths, two drowning deaths were blamed on the storms, one each in Oklahoma and Kansas.

High water had poured over the tops of at least 20 levees along the Missouri River and other streams in the state, authorities said Wednesday.

But by Thursday morning, "here in Levasy, population 102, it appears the river has crested and actually looks to be down about 6 to 8 inches," reports CBS News correspondent Cynthia Bowers.

"We're hearing that some of the projected crests have been downgraded in some places, by as much as four feet. While the river is still rising, these towns may be OK," added Bowers.

Big Lake, a town of about 150 permanent residents in the state's northwest corner, was inundated by five levee breaks along the Missouri River and four smaller ones on other streams.

No injuries were reported but the Missouri Water Patrol rescued about 20 people from their flooded homes.

In Missouri's Jackson County, authorities evacuated 300 to 400 residents on Wednesday. At least a dozen homes were partially under water from the Missouri River, a dispatcher said.

In central Missouri, the state capital, Jefferson City, was preparing for flooding. After floods in 1993 and 1995, the city raised the elevation of its riverside sewage treatment plant, and the federal government bought out scores of homes on the north shore of the river, but the airport and businesses are still vulnerable.

On the West Coast, in view of many Los Angeles residents, a blaze had covered more than 800 acres in the city's sprawling Griffith Park behind the iconic Griffith Observatory.

The danger to homes south of the park had eased Wednesday and many of the hundreds of residents evacuated overnight were allowed to return. However, fire officials warned that conditions could change.

No flames were showing by evening, Mayor Antonio Villaraigosa told a press conference at the observatory, and firefighters expected full containment by Thursday night.

"The tide is turning in our favor," the mayor said.

At least 30 companies of firefighters were to remain in case the 817-acre blaze came back to life.

The fire appeared to have been accidental, said Battalion chief John Miller, who oversees arson investigations.

"This is a tragic sunrise," City Councilman Tom LaBonge said while surveying the damage. "You look right there and you'd think you were at the observatory looking at Mars."

In northern Florida a wildfire had forced the evacuation of about 250 homes, said Annaleasa Winter, a state forestry spokeswoman. That fire had blackened up to 18,000 acres and was 35 percent contained on Wednesday night.

In Georgia officials issued a mandatory evacuation Wednesday for an area that they said by Thursday may be in the path of a 107,000-acre blaze in the Okefenokee National Wildlife Refuge, the largest recorded blaze since state record-keeping began in 1957.

Smoke was spreading across wide areas of Florida as wind circulated around Subtropical Storm Andrea, centered about 100 miles off the Georgia coast with top sustained wind around 45 mph. The National Weather Service forecast that the storm would show little movement and dissipate near the coast in four days.

The storm "could be a mixed blessing," Crist said.

"What we're hoping for is more the wet stuff. If that can come in a little bit, give us some showers, that would be a tremendous help to Florida obviously," he told Early Show co-anchor Julie Chen. "In addition, it looks like we're going to get some rain. These horrible floods they had in Iowa recently, some of that front's going to be coming in, we think, the latter part of the weekend or the first part of next week, hopefully giving us some more of the wet stuff to help suppress the drought we had."

But meteorologist warn the storm's lightning could also spark off more fires.

As of 11:00 a.m. EDT, subtropical storm Andrea was about 100 miles east of Jacksonville and 80 miles northeast of Daytona Beach, and its winds may be felt in Jacksonville. It's expected to remain offshore throughout Thursday as it continues to drift southward slowly.

Elsewhere, a wildfire near the Canadian border in northeastern Minnesota had covered more than 34 square miles Wednesday, adding more than eight square miles in one day, authorities said. It had destroyed 45 buildings, including multimillion-dollar homes, and firefighters said it was just 5 percent contained.

More than 100 people had been removed from their homes in the path of the fire.