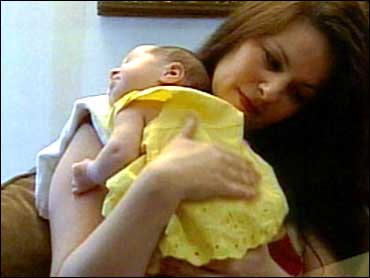 Pregnant women who try a natural delivery after an earlier Caesarean section face greater risks — but still very low ones — compared with those who opt for a second C-section, a large study suggests.
The lead researcher said the chief risks — a torn uterus in the mother and brain damage in her newborn — are so unlikely that this study may boost the slumping rate of attempted natural births after C-sections. "I think it will certainly open up the dialogue once again," said Dr. Mark Landon of Ohio State University.

The study was released Tuesday before publication in this week's New England Journal of Medicine. It was carried out at 19 teaching hospitals nationwide, with collaboration and funding from the National Institutes of Health. It is the most elaborate effort yet to examine the safety of natural birth after Caesarean section, researchers say.

Caesarean sections are still uncommon, but a study published last month in the British Medical Journal has found that the rate of elective C-section among American expectant mothers with uncomplicated pregnancies has increased by 67 percent since 1991, with a gradual rise from 1991 to 1996 and a rapid one thereafter.

The medical community has long debated the merits and safety. Surgical C-section brings its own set of risks, like hemorrhaging and infection. Vaginal deliveries involve less hospital time and expense. In 1980, an NIH committee encouraged natural birth attempts in carefully selected women with a history of C-section. The rate of natural births after C-section peaked at 28 percent in 1996.

Since then, reports of uterine ruptures have pushed down the rate. Many hospitals, nervous about the liability or need for surgical teams on standby, are stopping doing such deliveries. By the end of last year, the rate had dropped to 11 percent.

Doctors and patients often elect repeat surgery for fear that the uterus, weakened by scarring from the previous Caesarean, will rupture under the strain of natural labor and birth. That can seriously endanger both mother and child.

In this study, the researchers identified 33,699 women who had previously delivered by Caesarean section. Their subsequent pregnancies were monitored as they chose either to attempt vaginal deliveries or opted for another C-section. More than half of those chose to try natural delivery. Of that group, a quarter encountered problems and had to switch to Caesarean section.

In the end, 124 women who started with natural labor, including the C-section transfers, suffered uterine ruptures — less than 1 percent of cases. There were no ruptures in the surgeries — only the cutting itself.

Seven babies suffered brain damage from uterine rupture, including two who died, according to the findings. Excluding pre-term deliveries where other factors come into play, one in 2,000 natural birth attempts ended with a brain-damaged or dead child as the result of a ruptured uterus.

There was no significant difference in the rate of maternal death between the natural-birth and surgical groups.

Researchers and doctors agreed that the findings can cut in favor of either kind of delivery, depending on the risk tolerance of particular patients.

"A less than 1 percent risk of uterine rupture is perfectly acceptable to one woman and, to another woman, she's thinking, 'Oh, my God, this is not going to work for me!"' said Dr. Laura Riley of Massachusetts General Hospital in Boston. She chairs the obstetrics committee of the American College of Obstetricians and Gynecologists.

However, some doctors cautioned that the study was conducted in leading hospitals, so the risks might be somewhat higher elsewhere.

"Even in major academic medical centers, with patients who are chosen in essence to be the best possible candidates, bad things can happen," said Dr. Michael Greene, an obstetrician at Massachusetts General who wrote an accompanying editorial.

Others emphasized the low risks. "Women who strongly don't want to have a repeat operation, this study now presents very good data showing their choice is reasonable," said Dr. Bruce Flamm, an obstetrician at the University of California, Irvine.