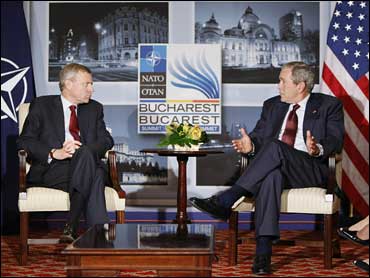 President Bush suffered a painful diplomatic setback Wednesday when NATO allies rebuffed his passionate pleas to put former Soviet republics Ukraine and Georgia on the path toward membership in the Western military alliance.

The decision, to be made final on Thursday, was sure to be cheered by Moscow, which heatedly opposes NATO's eastward expansion.

In another sign of discord, Greece blocked Macedonia's request to join the 26-nation alliance because of a dispute over its name. Only Croatia and Albania will be invited as new members.

It was a sour outcome for Mr. Bush at his final NATO summit as he sought to polish his foreign policy legacy. Instead, he wound up sidetracked by opposition and splits among European allies. It was a result that was foreshadowed by public statements from France and Germany but Mr. Bush nevertheless put his prestige on the line and even made a stop in Ukraine on Monday to argue his case.

"We are convinced that it is too early to grant both states the (pre-membership) status," German Chancellor Angela Merkel said as she arrived in Bucharest for the summit. It only takes one NATO member to block a decision, because policy-making is reached by consensus.

Mr. Bush was counting on the summit to strongly endorse plans for an anti-missile shield in Europe despite once-heated objections from Moscow.

The summit's opening dinner ran two hours longer than scheduled as the discussion went around the table, with each leader making his or her case. The White House expressed confidence that NATO would give a strong statement of support for its mission in Afghanistan and that a number of countries would pledge additional troops.

Mr. Bush, going into the talks, said he was "optimistic that this is going to be a very successful summit."

Diplomats said the alliance would offer a statement saying NATO's door will remain open if Ukraine and Georgia move ahead with political and military reforms and build support for NATO among their citizens.

Afghanistan loomed as the summit's No. 1 topic, a point of contention between some Europeans who see the NATO mission as largely a humanitarian effort and the Bush administration and others who see it as a central front in the fight against terrorism.

Canada had threatened to pull its troops from the front lines in southern Afghanistan unless other allies sent an additional 1,000 combat troops to help.

NATO has about 47,000 troops in Afghanistan, but commanders are pleading for more troops in the south, where Taliban insurgents are wreaking the most havoc. The United States supplies the largest contingent, about 14,000 for NATO, plus the United States has 13,000 operating separately in eastern Afghanistan hunting terrorists and training Afghan forces.

"We expect our NATO allies to shoulder the burden necessary to succeed" in Afghanistan, Bush said a midday news conference with Romania President Traian Basescu on a Black Sea beach.

French President Nicolas Sarkozy has offered a battalion - normally about 700 to 800 troops - for the volatile eastern region, NATO spokesman James Appathurai said, reporting on the dinner. That would free up U.S. troops to move south. Appathurai said the offers on the opening day of the summit would meet Canada's demands.

To make up for other allies, Mr. Bush has pledged to send an additional 3,200 Marines to Afghanistan. The White House on Wednesday said the actual number would be 3,500.

"It looks like to me that the ingredients are coming together where that could be a distinct possibility," Mr. Bush said. "And that would be a very important statement because NATO could assure its members and the people within NATO that there would be defenses available to prevent a Middle Eastern nation, for example, from launching a strike which could harm our security."

The U.S. worries most that Iran could someday launch such as missile.

NATO chief Jaap de Hoop Scheffer, talking with Mr. Bush before the summit, said NATO would "take a clear position on missile defense, recognizing the threat and working on the answers to that recognized threat."

De Hoop Scheffer also said the alliance would publish a "vision statement" about NATO'S long-term commitment to Afghanistan. "We should not forget that we are on one of the front lines in a fight against terrorism in Afghanistan," he said.

Taking note of the dispute over Ukraine and Georgia, de Hoop Scheffer said before the dinner: "I think this can never be a question of `whether.' The `whether' is not questionable. If these nations fulfill the criteria, and if they want to enter - want to enter themselves through NATO's open door, I think that door should be open."

A senior U.S. official, speaking on condition of anonymity because the leaders' meeting was private, said the Bush administration would still consider the summit a success if NATO makes clear that the door to membership remains open. The debate, according to the official, is whether the Bucharest meeting was the right time to settle the question about Ukraine and Georgia.

The alliance is due to invite Croatia and Albania to join, but Greece is pledging to veto Macedonia's bid unless there is a last-minute agreement to change the candidate country's name. Greece says that implies a claim on its northern region, also called Macedonia.

"Until the name issue is resolved there cannot be consensus" on Macedonia's bid, Appathurai said.

"I feel good about what I'm hearing from my fellow leaders about their desire to support Afghanistan," the president said after meeting with de Hoop Scheffer. "I think if tomorrow we get clarification on troop support ... the people of Afghanistan are going to be more than grateful." He did not mention any specific numbers of additional troops.

Mr. Bush plans to meet with Russian President Vladimir Putin on Sunday in the resort city of Sochi, the last such session of their presidencies. Bush is also to meet with Putin's hand-picked successor, Dmitry Medvedev.

Putin has been adamantly opposed to the U.S. push for NATO membership for Ukraine and Georgia and sees this as an affront to Russia's sovereignty, reports CBS News senior White House correspondent Bill Plante.

The White House is holding out hopes of an agreement easing Russia's opposition to a missile shield.

Mr. Bush said Putin should not fear NATO, but rather should welcome the alliance because it "is a group of nations dedicated to peace."