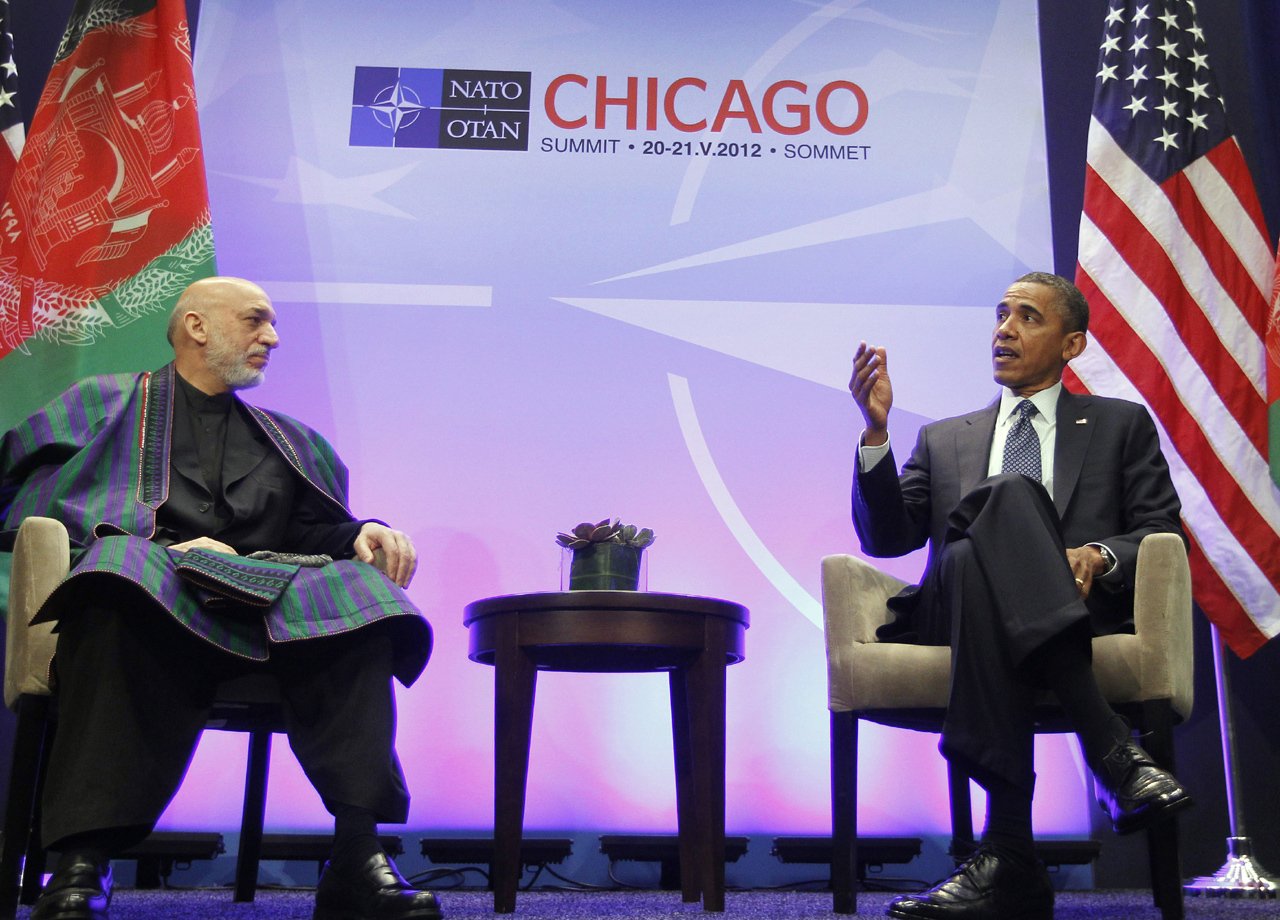 Meeting in Mr. Obama's home city of Chicago, the leaders discussed their next steps in Afghanistan: preparing for elections and finding money to support Afghan security forces at a time when member nations are dealing with tight budgets and waning public support for the war.

They insisted the fighting coalition will remain effective despite the plans of newly elected French President Francois Hollande to yank combat troops out early.

"There will be no rush for the exits," NATO Secretary General Anders Fogh Rasmussen said. "Our goal, our strategy, our timetable remain unchanged."

Rasmussen denied there were fresh cracks in the alliance. He suggested a deal will emerge for France to move into a noncombat role but continue to support the international mission.

NATO chief: "No rush for the exits" in Afghanistan

After meeting with Afghan President Hamid Karzai, President Obama said that the end of the war is in sight. The military alliance is pledged to remain in Afghanistan into 2014, but will seal plans Sunday and Monday to shift foreign forces off the front lines a year faster than once planned.

Afghan forces will take the lead throughout the nation next year, instead of in 2014, despite uneven performance under U.S. and other outside tutelage so far. The shift is in large part a response to plummeting public support for the war in Europe and the United States, contributors of most of the 130,000 foreign troops now fighting the Taliban-led insurgency. A majority of Americans now say the war is unwinnable or not worth continuing.

Karzai said his nation is looking forward to the end of war, "so that Afghanistan is no longer a burden on the shoulder of our friends in the international community, on the shoulders of the United States and our other allies."

Hollande, the new French president, has said he will withdraw all French combat troops from Afghanistan by year's end - a full two years before the timeline agreed to by nations in the U.S.-led NATO coalition.

Before the one-hour meeting with Karzai, a senior U.S. official said President Obama would focus on planning for Afghanistan's 2014 elections, as well as the prospect of a political settlement with the Taliban.

Karzai has said repeatedly he will step down from power when his term ends in 2014, opening the way for new elections. NATO's scheduled end of the war was built around those plans, with foreign forces staying until the 2014 election but exiting the country by 2015.

Past Afghan elections were riddled with irregularities, and the U.S. applied heavy pressure to Karzai to schedule a second round of voting during the last presidential contest in 2009. The runoff was never held because Karzai's challenger pulled out, protesting what he said was an impossible level of corruption.

The election chapter opened a rift between the U.S. and Karzai, who suspected that the Obama administration wanted to replace him.

The Obama administration has mostly repaired its relationship with Karzai, but mistrust remains on both sides.

The U.S. official, speaking on condition of anonymity to discuss sensitive diplomacy, said before the meeting that President Obama and Karzai had planned to discuss prospects for a political settlement or peace pact between Karzai's government and the Taliban-led insurgency. The Taliban pulled out of U.S.-led talks in March, but separate talks among Afghan and other contacts continue, the U.S. official said.

The Taliban is urging nations fighting in Afghanistan to follow France's lead and pull their international forces from the war this year.

"We call upon all the other NATO member countries to avoid working for the political interests of American officials and answer the call of your own people by immediately removing all your troops from Afghanistan," the group said in a statement before the meeting.

The insurgent group cited declining public support for the war in the West and said political leaders should listen to their constituents and get out of Afghanistan.

While Afghanistan is dominating the summit, NATO is also struggling with age-old tensions over relatively low defense spending in some European countries. It is looking for ways to make its operations leaner to address what Rasmussen calls "security in an age of austerity."

The alliance is also expected to announce progress in its European missile defense system. That will allow it to begin countering some missile threats, though the system is not scheduled to be fully operational until 2022. The Obama administration has touted the progress as sign of alliance solidarity. But it is mainly paid for and operated by the United States.

The NATO summit caps an extraordinary weekend of international summitry. Mr. Obama and the leaders of the world's leading industrial nations convened at Camp David, the presidential retreat outside Washington, for two days of talks focused in large part on Europe's economic crisis.

Joining Obama and many of the G-8 leaders in Chicago are the heads of NATO alliance nations and other countries with a stake in the Afghan war.

Prominent among those nations is Pakistan. Tensions between the U.S. and Pakistan have been running high following several incidents, including the U.S. raid in Pakistan that led to the death of Osama bin Laden and a U.S. airstrike that killed two dozen Pakistani soldiers.

Both countries have been seeking to restore normal relations. Pakistani President Asif Ali Zardari's acceptance of an invitation to attend the NATO summit was seen as an indication that his country would reopen major roads used to supply NATO fighting forces in Afghanistan, a key U.S. demand.

White House officials said that while they believe an agreement on reopening the supply routes will be reached, they do not expect that to happen during the NATO meetings. The two nations are haggling over how much Pakistan will be paid to allow the heavy transport truck to pass through. A senior U.S. official said the two sides are far apart. The official spoke on condition of anonymity to discuss sensitive diplomacy.

Officials have indicated that Obama and Zardari will not hold a separate bilateral meeting until the matter is resolved. Although miffed, Zardari is expected to see Secretary of State Hillary Rodham Clinton and other U.S. officials in Chicago.

"I do hope that we will see a reopening of the transit routes in the very near future," Rasmussen said. "These negotiations will continue, but I am hopeful that they will be concluded in a positive manner."