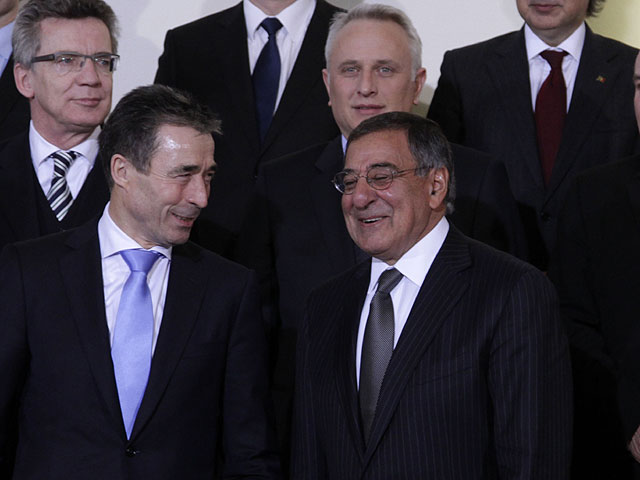 BRUSSELS - NATO's top official joined the U.S. and France on Thursday in calling for Afghan forces to take the lead in all combat operations by mid-2013, a year earlier than the original timeline, while Western troops would shift to back up roles in the fight against the Taliban.

Both U.S. Defense Secretary Leon Panetta and French President Nicolas Sarkozy have suggested in recent days that the coalition should gradually transition out of combat in 2013.

In 2010, NATO leaders agreed that Afghan forces would take control province by province until they have full responsibility for security in all of Afghanistan by the end of 2014. Until now, it was widely assumed that coalition troops would retain the lead role in military operations until that final handover.

But under the arrangement being discussed by NATO defense ministers in Brussels this week, coalition troops would no longer lead combat missions after mid- to late-2013, although they would still provide assistance to the Afghans.

Speaking to reporters before the two-day meeting, NATO Secretary-General Anders Fogh Rasmussen said Afghanistan remains the alliance's top operational priority, and that the coalition has been making progress in the war.

He said transition to Afghan security control, which started last year, will continue through mid-2013 with the Afghan army and police gradually taking the lead in all regions of the country.

(CBS News' Lara Logan and Norah O'Donnell discuss the U.S. decision to end combat operations a year ahead of schedule.)

This process will conclude at the end of 2014, when government forces are scheduled to assume full responsibility for security in the entire country and most Western forces would withdraw, Fogh Rasmussen said. The allies are working on the details of a longterm partnership with Afghanistan, he said.

"But Afghans will not be left alone at the end of the transition process. We are committed to providing support to Afghanistan through transition and beyond," Fogh Rasmussen said.

"We are actually all in the same place. We all recognized that in 2013 there will be an evolution of the mission, the Afghans will be having the lead responsibility for the security throughout the whole country," he said. "But we will remain there in the combat support role and we will continue to do so, in our case, until the end of 2014, and the USA has indicated that it may go longer than that."

Speaking to reporters on the flight to Brussels, Panetta said: "Hopefully by the mid to latter part of 2013 we'll be able to make a transition from a combat role to a training, advise and assist role."

He added that this "doesn't mean we're not going to be combat-ready," but rather that the U.S. and other international forces will no longer be in "the formal combat role we're in now."

The ministerial meeting comes a day after a secret NATO report was leaked to the media suggesting that insurgent morale remains extremely high after more than a decade of war and that the Taliban remain confident they will defeat the coalition.

It also follows a series of attacks by members of Afghan forces on NATO troops or advisers. The repeated attacks have prompted worries about the degree of Taliban infiltration in the ranks of the national army and police, as they rapidly expand to meet the 2014 target for Afghan forces to take over security and most international troops to leave.

There have been at least 35 attacks on international troops since 2007 by Afghan soldiers, police or insurgents wearing their uniforms, according to a tally by The Associated Press. The number rose sharply last year to 17, up from six in 2010.

The ministerial meeting is intended to pave the way for the alliance's summit in Chicago in May. Ministers are also scheduled to discuss plans to deploy a ballistic missile defense system in Europe and maintaining the alliance's capabilities at a time of austerity and defense cuts in both the United States and Europe.

A NATO diplomat said the allies had decided to locate the headquarters for the missile shield at a U.S. air base in Ramstein, Germany.