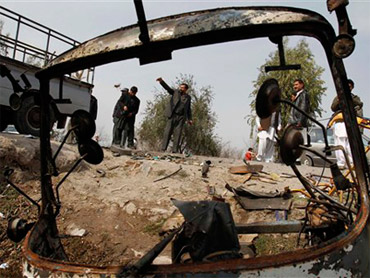 The commander of U.S. and NATO forces in Afghanistan took his apology for a weekend airstrike that killed civilians directly to the Afghan people Tuesday, with a nationally televised video in which he pledged to work to regain their trust as NATO continues a mass offensive against the Taliban in the south.

Two U.S. Marine battalions, accompanied by Afghan troops, pushing from the north and south of the insurgent stronghold of Marjah finally linked up after more than a week, creating a direct route across the town that allows convoys to supply ammunition and reinforcements.

In the video, translated into the Afghan languages of Dari and Pashto on a NATO Web site, a stern Gen. Stanley McChrystal apologizes for the strike in central Uruzgan province that Afghan officials say killed at least 21 people. The video was broadcast nationally on Afghan television Tuesday.

Sunday's attack by NATO jets on a convoy of cars was the deadliest attack on civilians in six months and prompted a sharp rebuke from the Afghan government. It comes as NATO is struggling to win public backing for a major military offensive against the Taliban in the south with a strategy that involves taking all precautions possible to protect civilians.

The civilian deaths occurred as 15,000 NATO, U.S. and Afghan soldiers were in their 10th day of fighting insurgents in the southern town of Marjah in Helmand province. The mission is to rout the Taliban, set up a local government and rush in aid to win public support.

A Tuesday morning explosion in Lashkar Gah, the capital of Helmand, left eight people dead and at least 16 others wounded, according to the Interior Ministry. Police chief Gen. Asadullah Sherzad said explosives in a parked motorbike were detonated by remote control in front of the traffic department.

The alliance said its planes fired on what was thought to be a group of insurgents in Uruzgan province on their way to attack NATO and Afghan forces. Interior Ministry spokesman Zemeri Bashary said the airstrike hit three minibuses, which were traveling on a major road near Uruzgan's border with Day Kundi province.

"I pledge to strengthen our efforts to regain your trust to build a brighter future for all Afghans," McChrystal said in the video. "I have instituted a thorough investigation to prevent this from happening again."

McChrystal apologized directly to President Hamid Karzai on Sunday shortly after the incident and the video is another sign of the military coalition's intense public relations campaign.

Although the airstrike was not related to the Marjah offensive, civilian casualties undermine NATO's goal of turning back the Taliban and winning the confidence of the Afghan people — one of the main objectives of the southern operation.

In Marjah on Tuesday, U.S. Marines from the 1st and 3rd Battalions, 6th Marines Regiment finally managed to link up after more than a week of hard marches through insurgent fire and mined poppy fields.

"This is a very important step," said Lt. Col. Brian Christmas, commander of the 3rd Battalion, explaining that the linkup gives NATO forces control of a continuous north-to-south route through town and also hinders insurgents' ability to move freely.

Sporadic fighting continued Tuesday as strongly entrenched Taliban units appeared to have regrouped in a heavily defended stronghold to the north.

On Monday, Adm. Mike Mullen, the chairman of the U.S. Joint Chiefs of Staff, told reporters at the Pentagon that the efforts against the Taliban were "messy" and "incredibly wasteful," as was war in general. "But that doesn't mean it's not worth the cost."

The incident in Uruzgan "reminds us of just how fragile and how tragic any move we can make, any move we make can ultimately be," he said.

"These are split-second decisions that commanders in combat on the ground have to make," he added.

Mullen said the troops in Marjah are making "steady, if perhaps a bit slower than anticipated, progress." He cited the prevalence of planted bombs and the care taken to avoid civilian casualties for the slow pace.

Karzai has repeatedly called on NATO to do more to protect civilians during stepped-up military operations.

In recent months, NATO has limited airstrikes and tightened rules of engagement on the battlefield to try to protect the Afghan people and win their loyalty from the Taliban.

It was the second time in nine days that NATO has apologized for killing civilians. On Feb. 14, two U.S. rockets slammed into a home outside Marjah, killing 12 people, including six children. According to NATO, at least 16 civilians have been killed so far during the offensive; human rights groups say the figure is at least 19.

Bashary said investigators had recovered 21 bodies from the Uruzgan airstrike and that two other people were missing.

The Afghan Cabinet reported a higher death toll, saying 27 civilians were killed, including four women and a child, and 12 other people were injured. The ministers urged NATO to "closely coordinate and exercise maximum care before conducting any military operation" to avoid further civilian casualties.

The toll was the highest involving civilians since last September, when U.S. pilots bombed two hijacked fuel tankers in a German-ordered airstrike near the northern town of Kunduz. Up to 142 people are believed to have died or been injured, German officials said. Afghan leaders estimated that 30 to 40 civilians were killed.

The controversy about the Uruzgan strike came as a suicide bomber detonated explosives at a community meeting Monday in eastern Afghanistan, killing 15 civilians including a prominent tribal leader widely criticized for failing to prevent Osama bin Laden's escape at Tora Bora after the Sept. 11, 2001, attacks in the United States.

The suicide bombing occurred outside Jalalabad, the capital of Nangarhar province. Police Gen. Mohammad Ayub Salangi said a militant attacked tribal elders and government workers who were meeting with a few hundred Afghan refugees to discuss the distribution of land.

Among those killed was Mohammad Zaman Ghamsharik, better known as Haji Zaman, one of the two principal Afghan warlords who went after bin Laden after the Taliban fled Kabul in 2001.

On Tuesday, a second bombing targeting a police convoy near Jalalabad left two civilians dead and two others injured, the Interior Ministry said. No police were injured in the incident.

A Senate Foreign Relations Committee report released in November 2009 said U.S. special operations forces relied on Zaman, described as a "wealthy drug smuggler" whom the U.S. had coaxed back from France, and fellow warlord Hazrat Ali.

On Dec. 11, 2001, Zaman told the senior U.S. military officer at Tora Bora that al Qaeda fighters wanted to surrender, but needed a cease-fire to allow them to get down from the mountains, the report said. That turned out to be a ruse, and bin Laden and hundreds of his followers escaped.

In Zabul province, a Romanian soldier died Tuesday and another was injured when their convoy was hit by a roadside bomb, Romania's Defense Ministry said. Romania has 1,035 troops in Afghanistan as part of NATO forces.