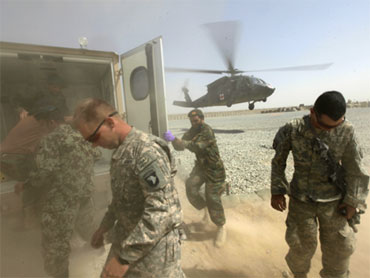 A deputy commander in an al Qaeda linked insurgent group was apprehended in an overnight operation in eastern Afghanistan that claimed the life of a woman, NATO said Friday.

Separately, the coalition reported that three more international soldiers - including one American - had been killed in the south. Nationalities of two of the victims were not released. They died in a roadside bombing Friday and the American was killed Thursday, officials said.

The latest deaths brought to at least 18 the number of American troops killed so far this month and 31 for the entire multinational force.

Afghanistan: The Road Ahead
On the Afghan Frontlines with Gen. Petraeus
Petraeus Talks about Challenges in Iraq
Afghanistan's Most Dangerous Job: Finding IEDs
Ahmed Karzai: No Proof in Criminal Accusations
Training Afghan Recruits, Behind the Scenes

NATO said the deputy commander, who was captured by a joint Afghan and coalition force in Khost province, ran weapons for the Haqqani network and reported directly to the group's senior leaders across the border in Pakistan. U.S. officials have described the Haqqani network as the most potent threat to American forces in Afghanistan.

When the troops arrived at the scene, they saw two men running from the targeted compound to another nearby. They fired after seeing someone point a weapon out of a window. Inside the room, they found one woman dead and another with a minor injury. An AK-47 was next to the female victim and a rifle and another AK-47 also was found in the building, NATO said.

Video from Afghanistan: the Road Ahead:

"Afghan and coalition forces do not intentionally target women and we take these incidents very seriously," said U.S. Army Col. Rafael Torres, a spokesman for the coalition. "We are taking a step-by-step approach in investigating what happened during this operation."

Troops at the scene treated the injured woman, who was later evacuated along with two male relatives to a coalition forces medical facility.

While questioning the men at the scene, the security force identified and detained the deputy commander along with several suspected insurgents. In the compound where the commander was captured, the security force found an AK-47, a rifle, seven grenades, six magazines and an ammunition belt.

Also in the south, an assistant police chief was killed by a roadside bomb on Thursday and three other policemen were injured when insurgents attacked a police post in the Dihrawud district of Uruzgan province, according to Gulab Khan, the deputy provincial police chief. Three civilians were killed in the same district Thursday by a bomb that was meant for another police official, district chief Khalfa Sadat said.
By Associated Press Writer Amir Shah. Mirwais Khan in Kandahar contributed to this report