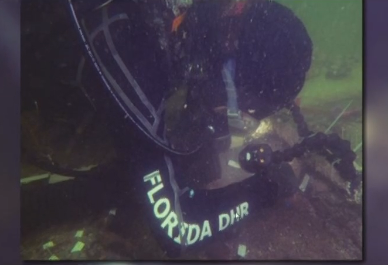 VENICE, Fla. -- A Native American burial site that is thousands of years old has been discovered off of Florida's Gulf Coast, CBS Tampa affiliate WTSP reports. "Seeing a 7,000-year-old site that is so well preserved in the Gulf of Mexico is awe inspiring," said Dr. Ryan Duggins, an underwater archaeology supervisor for the Florida Bureau of Archeological Research. "We are truly humbled by this experience."

"Through non-invasive underwater survey and investigation techniques, including magnetometry, sub-bottom profiling, and side-scan sonar, BAR's underwater archaeologists soon documented evidence of a prehistoric Native American burial site in what appears to have been a freshwater peat-bottomed pond thousands of years ago," says a news release.

WTSP reports the only known submerged, offshore, prehistoric burial sites are located in Denmark and Israel.

The site will help archaeologists understand what the environment was like for Florida's indigenous people over 7,000 years ago, and how they lived.

"As important as the site is archaeologically, it is crucial that the site and the people buried there are treated with the utmost sensitivity and respect," said Dr. Timothy Parsons, the director of Florida's Division of Historical Resources. "The people buried at the site are the ancestors of America's living indigenous people."