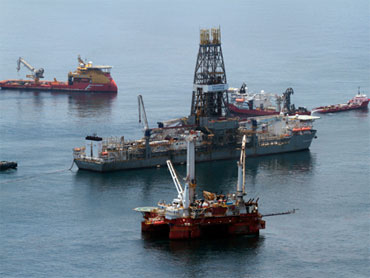 Britain has doubled rig inspections. Bulgaria scrapped plans for a new oil pipeline. Chinese and French oil giants are upgrading equipment and procedures designed to prevent spills. As oil continues to gush into the Gulf of Mexico, nations around the globe are taking a cue from this cautionary tale and ratcheting up their oversight of the petroleum industry.

"We must also deal with the possibility of an accident near our shores," EU Commission President Jose Manuel Barroso told the European Parliament in Strasbourg last week. "Drilling techniques have similarities even if the waters are much shallower in the North Sea."

Canada's offshore regulator is tightening oversight of its deepest-ever exploration well, being drilled by Chevron off the coast of Newfoundland. Meanwhile, China's offshore oil company, China National Offshore Oil Corp., or CNOOC, says it is upgrading its blowout preventer system and diving equipment for a drilling rig being built in Shanghai.

And France's Total has formed two task forces to check facilities and strengthen contingency plans for any potential major pollution.

"We all saw what is happening in the Gulf of Mexico," said Bulgaria Prime Minister Boiko Borisov. The government canceled a new pipeline that would have carried Russian oil to Greece following resistance from residents of the Black Sea town of Burgas, where the pipeline was to start.

The Gulf catastrophe also has sparked a debate over the practice of deepwater drilling itself — with some viewing the spill as reason to ban it altogether.

"The very first victims were the fishermen in Louisiana," the mass-circulation JoongAng Sunday newspaper in South Korea, where Transocean Ltd.'s Deepwater Horizon rig was built, said in an editorial. "But no one on earth is free from the impact of this disaster."

The scrutiny reflects growing unease about oil companies seeking to drill farther out to sea and deeper than ever before. The process is expensive, risky and largely uncharted, highlighted by BP's use of untested methods to try to stem the Gulf spill.

The most dramatic response has been in the U.S., which has banned offshore drilling in depths of 500 feet (150 meters) or more until late November. In addition, the regulatory body that oversees deepwater drilling is being overhauled, new permits will likely be tougher to come by and new safety measures are expected to be mandated.

U.S. companies such as ConocoPhillips are reviewing safety measures while awaiting the results of investigations into the causes of the Gulf disaster. Others, including Anadarko Petroleum Corp., which has a 25 percent stake in BP's gushing well, may relocate rigs idled by the U.S. drilling ban to Brazil, which has been quietly pushing ahead with its potentially lucrative deepwater fields in the Atlantic.

Reaction has been more muted in the oil-rich Middle East.

The spill is a "big problem, but it is not crisis," said Shukri Ghanem, the head of Libya's National Oil Corp. who serves as the North African nation's de facto oil minister.

In Iraq, Tariq Shafiq, director of oil consultancy Petrolog and Associates, said oil officials may tighten regulations, but he expects existing contracts to be honored in a country where BP holds a 38 percent stake in the venture to develop the prized 17.8 billion barrel Rumaila oil field.

With most of their oil on land, Middle Eastern states instead see opportunities to strengthen the region's clout if deepwater drilling is restricted, Shafiq says.

European reaction, however, has been vigorous.

As headlines such as "Apocalypse in oil" in Germany's leading Sueddeutsche Zeitung blare out at readers, BP shares have plummeted. They've lost almost half their value since the April 20 rig explosion. Shares of Switzerland's Transocean Ltd. have also plunged.

That's potentially bad news for millions of retirees in Europe as the two companies are major backers of pension funds. Some 18 million people in Britain hold shares in BP, largely through their pensions.

The U.S. political reaction — and the pension issue — has fueled a backlash. President Obama has harshly criticized BP CEO Tony Hayward, and has insisted on referring to BP by its former name, British Petroleum. This has led many, including London Mayor Boris Johnson, to complain about the "anti-British rhetoric" coming from America.

Others suggest the U.S. leader is covering up his own failings in dealing with the disaster.

"The whole might of American wealth and technology is displayed as utterly unable to deal with the disastrous spill — so what is more natural than a crude, bigoted, xenophobic display of partisan political Presidential petulance against a multinational company?" wrote Conservative Party lawmaker Norman Tebbitt on his website.

But in India, there were calls for Prime Minister Manmohan Singh to follow Obama's strident example and gain full retribution for the victims of the 1984 toxic gas leak in Bhopal, which killed an estimated 15,000 people.

"Kick ass for Bhopal," pleaded Sunita Narain, director of the Center for Science and Environment, in an editorial in the Hindustan Times. A court earlier this month convicted seven former senior employees of Union Carbide's Indian subsidiary for their roles in the disaster, but survivors said the light sentences — two years in prison — are too little, too late given the scale of the damage.

More on the oil spill: