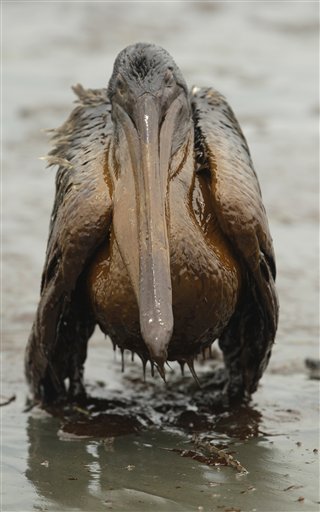 The nightly news is filled with images of oily, desperate looking birds that seem more like sea monsters than the stately birds they were before the oil started gushing.

The news is also filled with dramatic images of rescuers saving birds with nets. Those birds are then transported to a number of rescue facilities up and down the Gulf Coast.

Literally hundreds of wildlife specialists and volunteers help the birds in an assembly-line fashion.

On Friday's "Washington Unplugged," Alicia Budich went to the National Zoo in Washington, D.C. to talk to Dan Boritt, the acting curator of birds, who has been involved in smaller rescue operations since 2002. From the calm of the National Zoo he was able to show how the harried rescuers clean the suffering birds' feathers.

Boritt spent time on Capitol Hill this week meeting with fellow members of the Association of Zoos and Aquariums to plan how zoos across the country can help the Gulf Coast. Right now, the animal rescue duties are being handled by residents of the Gulf, but with a spill this large it's likely the region will need backup. If that call for backup comes, people like Boritt and his staff will be ready to help.

Boritt also took Budich into the Roseate Spoonbill's cage. The Roseate is a pink bird with a distinctive, spoon-shaped beak whose natural habitat is the Gulf Coast. Boritt said that even a "bird guy" like himself has trouble identifying the birds in the footage of oil-soaked creatures, but it's likely some of the brown birds on TV are indeed pink.

The Roseate is indeed more colorful than the Brown Pelican, but it seems to Boritt that the Brown Pelican is in the most danger. Just a few months ago it was taken off the Endangered Species list, but Boritt is convinced that by the end of this year it will be locally extinct - again - in Louisiana.

Making the situation worse for the Brown Pelican is that this is nesting season. So mothers who may be rescued and released in Florida are naturally inclined to try to find their way back to their nests. Those nests tend to be right in the heart of the spill.

And even if the mothers stay in Florida, officials are worrying more and more that the Atlantic coast of Florida might not be safe enough for the rescued birds. With oil still seeping into the ocean and currents moving it every which way, there's no guarantee oil won't find its way around the Panhandle.

The National Zoo's plans are just an experiment right now, said Boritt - an experiment he and zookeepers nationwide are hoping goes well while they prepare for the worst.

Watch Friday's Washington Unplugged above also featuring Sen. Bill Nelson on the blocking of journalists from covering the impact of the oil spill, and this week's "Flash Points" with Juan Zarate.