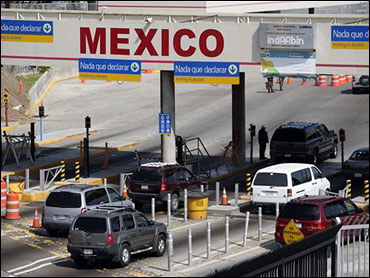 The Obama administration announced Monday that National Guard troops will begin to be deployed to the U.S.-Mexico border on August 1st "as part of the administration's unprecedented efforts to combat the transnational criminal organizations that smuggle weapons, cash and people" on the border.

President Obama said in May that up to 1,200 National Guard troops would be deployed to the border to provide support in the fight against illegal immigration and criminal activity along the border.

According to the Department of Homeland Security and Department of Defense, the largest chunk of National Guard troops - 524 - are being deployed to Arizona, which has become the focus of the debate over immigration thanks to its controversial immigration law.

Federal officials said California and Texas are getting more than 200 troops each, while 72 are being deployed in New Mexico and 130 are "serving as command and control and other support."

The Obama administration says the troops will be in place for a year. They "will provide direct support to federal law enforcement officers and agents working in high-risk areas to disrupt criminal organizations seeking to move people and goods illegally across the Southwest border," according to Homeland Security Secretary Janet Napolitano.

According to the Associated Press, the troops will be fully deployed by September.

Gunmen killed 17 people at a party in northern Mexico yesterday in an apparent instance of drug-related violence. In the United States over the past decade, violence in border towns has been essentially flat despite suggestions violence has been on the rise.

Many Republicans say the border must be secured before the federal government moves forward with immigration reform efforts. Mr. Obama argues the southern border is "more secure today than at any time in 20 years," though he says there is still more to do.

"This is the kind of action we want from the Administration - not suing the state," Democratic Rep. Ann Kirkpatrick of Arizona said in response to the news. "However, we should continue to move forward with a much larger commitment of National Guard troops right away and with an expansion of the Border Patrol to strengthen security for the long run."

The White House says Mr. Obama's immigration reform plan includes "lasting and dedicated resources by which to secure our borders and make our communities safer; holding unscrupulous employers accountable who hire workers illegally and exploit them and providing clear guidance for the many employers who want to play by the rules; and requiring those who have come here illegally to pay a fine, pay back taxes, learn English, and get right with the law."