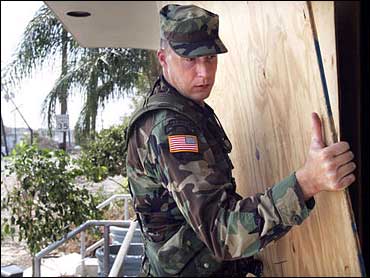 The National Guard is stretched so thin by simultaneous assignments in Iraq and the hurricane-ravaged Gulf Coast that leaders in statehouses and Congress say it is time to reconsider how the force is used.

Republicans and Democrats alike worry about the service's ability to balance its federal and state missions of fighting wars and responding to domestic crises.

"We need to look at what is going to be the long-term future of our Guard when states need to rely on these soldiers for emergencies and the nation continues to rely on them for overseas deployment," said Virginia Gov. Mark Warner, a Democrat.

Since the storm devastated the deep South, Republicans and Democrats have praised the Guard for what may be the most massive U.S. military response to a domestic natural disaster.

But lawmakers also have questioned whether poor coordination between the federal government and the states and the overseas deployments kept the Guard from getting where it was needed quickly after the hurricane.

The head of the National Guard Bureau said Friday the assignment of thousands of Guard troops from Mississippi and Louisiana to Iraq delayed those states' initial hurricane response by about a day.

"Had that brigade been at home and not in Iraq, their expertise and capabilities could have been brought to bear," said Lt. Gen. Steven Blum, the bureau's chief.

However, Blum said that overall, the Iraq assignment is not limiting the military's ability to continue the rescue and recovery operations.

Nevertheless, lawmakers worry about the short-term impact of the dual duty on the Guard's manpower and equipment availability and the long-term effect on recruitment and retention.

"All those things are going to become much bigger issues that we're going to have to address," said Sen. John Thune of South Dakota, a Republican on the Senate Armed Services Committee.

Another committee member, Sen. Jack Reed, D-R.I., called Hurricane Katrina a wake-up call that will force Congress to re-evaluate "how do you maintain overseas deployment of significant numbers and still maintain a Guard force in the United States capable of responding to disasters?"

Some lawmakers say the responsibilities placed on the Guard now buttress their long-standing argument that the United States must permanently increase active-duty forces. But those lawmakers also acknowledge that's a tall order at a time of lagging recruitment.

"We're overextended worldwide," said Rep. John Murtha, D-Pa. "We have too small an Army for the job that we're doing, yet we can't increase the size of the Army because it's volunteer and we can't enlist anybody."

The federal government has not always brought the Guard under its control for overseas military missions, choosing in many cases to leave the units in states to assist governors during civil disturbances and natural disasters.

But in recent years, the Pentagon has viewed the part-time citizen soldiers as a component of overall military operations and regularly sent Guard forces abroad, often for extended tours.

Calling on the Guard for hurricane relief for an undetermined amount of time has intensified those concerns.

"Iraq and Afghanistan alone have been stressful," said Sen. John Cornyn, R-Texas. "This doesn't make it any easier. And it probably makes it harder."

Arkansas Gov. Mike Huckabee, a Republican, said the hurricane clearly adds strain. However, he said: "The level of catastrophe is so enormous it would tax us regardless" of whether or not the Guard was serving overseas.

President Bush and Defense Secretary Donald H. Rumsfeld contend the military can handle the war and hurricane relief. But some lawmakers aren't convinced.

"It's pretty clear we have enough Guard people in the United States, but are they capable of handling our oversees commitments as well? We need to figure out how that impacts our ability in Iraq," said Sen. John McCain, R-Ariz.