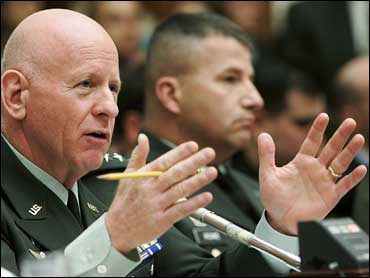 The first wave of about 800 National Guard soldiers will head to the U.S-Mexico border as early as next week, including planners and leadership personnel who will stay longer than the planned 21-day missions, the National Guard chief told lawmakers Wednesday.

Lt. Gen. Steven Blum said 200 soldiers are preparing to go to each of the four border states -- California, Texas, Arizona and New Mexico -- around June 1. He said the initial troops will be part of a longer-term force of project managers who will stay on the job over time to provide continuity in the new border program.

The move comes as The Senate voted Wednesday to limit debate on election-year immigration legislation, clearing the way for final passage later this week of a bill that calls for tougher border security as well as an eventual chance at citizenship for millions of men and women in the country illegally.

CBS News correspondent Bob Fuss reports that after more amendments, the bill will likely pass Thursday. But then comes the hard part – reconciling it with an enforcement-only bill that passed the House, declaring everyone here without papers a felon and making it a crime to help them.

The troops represent the launch of President Bush's plan to dispatch up to 6,000 National Guard members to states bordering Mexico to support the Border Patrol and help stem the flow of illegal immigrants across the border.

It was not clear whether the initial influx of Guard members would come from the four border states or from other units across the country. Blum said the Guard troops that will be deployed longer than three weeks are volunteers.

Gov. Janet Napolitano said Blum's comments match what she has been told about a phased-in troop deployment.

"They'll be staging in," Napolitano said. "You don't just snap your fingers and move 6,000 Guard people to the border."

Under the plan outline by Blum, most of the troops would spend about 21 days, which includes their normal annual two-week training mission, working along the border. The Guard troops would be used for engineering, road and fence building, transportation, logistics and surveillance and reconnaissance.

Napolitano said 300 additional Arizona Guard members are expected to be among those deployed under President Bush's plan. The state expects federal funding to cover the costs.

Blum and Paul McHale, assistant defense secretary for homeland defense, repeatedly told members of the House Armed Services Committee that the guard members would be armed for personal protection, but would not do significant law enforcement duties.

And they said the two-year plan, which calls for using up to 6,000 troops at a time in the first year, and no more than 3,000 in the second year, will not overtax the guard or impair troops' ability to train or prepare for combat.

Some committee members echoed complaints from critics who have suggested that the border plan would overburden a National Guard that is already stretched by deployments to Iraq and Afghanistan. But Blum said the border program, coupled with the approximately 71,000 Guard members deployed overseas, still leaves more than 350,000 Army and Air Guard available for other homeland defense or disaster assistance.

David Aguilar, chief of the border patrol, also told lawmakers that the plan will be augmented with additional, strategically located fencing, as well as an increased of about 6,000 border patrol guards by some time in 2008.

Hunter and others also expressed concerns about the need to shore up other border enforcement efforts, including the fact that some U.S. attorneys will not prosecute smugglers who bring in fewer than a dozen illegal immigrants.

While the Senate Thursday is expected to approve what has come to be called the "roots approach" (the longer an illegal immigrant has been here, the easier it is to stay). However, CBS News correspondent Sharyl Attkisson reports, House leaders said they won't go along.

On Tuesday, the Senate called for tougher employer penalties on businesses that hire illegal workers. The vote was 58-40.

Employers who do not use a new computerized system could be fined $200 to $600. The system would include information from the Social Security Administration, the Internal Revenue Service and Homeland Security Department.

There would be $20,000 fines for hiring illegal immigrants once the new screening system is in place, double the current maximum. Repeated violators could be sentenced to prison terms of up to three years.

Congress passed employer sanctions as part of the 1986 amnesty law, but they were never fully enforced and workers and employers got around them with fraudulent documents.

The Senate bill requires employers to check Social Security numbers and the immigration status of all new hires within 18 months after money is provided to the Homeland Security Department to expand the electronic system for screening workers.

The measure provides workers opportunities to contest the system's determination and to correct information that may be incorrectly flagging them as illegal workers. It also protects employers from liability if the screening system makes a mistake.

In other immigration-related news, New York City Mayor Michael Bloomberg Wednesday called for a plan to establish a DNA or fingerprint database to track and verify all legal U.S. workers.

The mayor also said elements of the legislation moving through Congress are ridiculous, and said some lawmakers are living in a "fantasy."

Carter, a Democrat and frequent critic of President George W. Bush, called the Republican president's commitment to immigration reform "quite admirable," saying he agrees with Mr. Bush's support of a system that would eventually grant citizenship to some illegal immigrants.