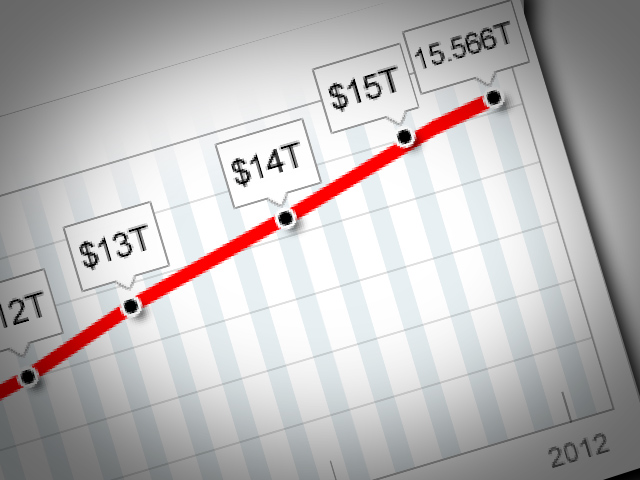 (CBS News) The National Debt has now increased more during President Obama's three years and two months in office than it did during 8 years of the George W. Bush presidency.

The Debt rose $4.899 trillion during the two terms of the Bush presidency. It has now gone up $4.939 trillion since President Obama took office.

The latest posting from the Bureau of Public Debt at the Treasury Department shows the National Debt now stands at $15.566 trillion. It was $10.626 trillion on President Bush's last day in office, which coincided with President Obama's first day.

The National Debt also now exceeds 100% of the nation's Gross Domestic Product, the total value of goods and services.

Mr. Obama has been quick to blame his predecessor for the soaring Debt, saying Mr. Bush paid for two wars and a Medicare prescription drug program with borrowed funds.

Federal budget records show the National Debt once topped 121% of GDP at the end of World War II. The Debt that year, 1946, was, by today's standards, a mere $270 billion dollars.

Mr. Obama doesn't mention the National Debt much, though he does want to be seen trying to reduce the annual budget deficit, though it's topped a trillion dollars for four years now.

As part of his "Win the Future" program, Mr. Obama called for "taking responsibility for our deficits, by cutting wasteful, excessive spending wherever we find it."

If Mr. Obama wins re-election, and his budget projections prove accurate, the National Debt will top $20 trillion in 2016, the final year of his second term. That would mean the Debt increased by 87 percent, or $9.34 trillion, during his two terms.