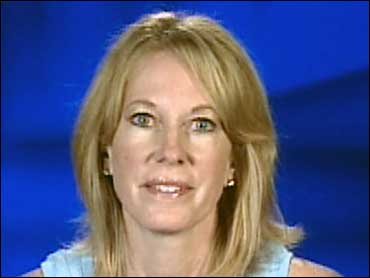 The mother of a Mountain Brook, Ala., teen who disappeared more than a year ago in Aruba said she was "crushed" by the dismissal of the lawsuit filed in New York against the Dutch teen last seen with her daughter.

"That was our only and last shot for justice," said Beth Twitty, mother of Natalee Holloway.

Twitty said she knew the case filed in New York State Supreme Court against Joran van der Sloot was a long shot, but the family took a chance.

"Until you hear that door closed you hang onto hope," Twitty said.

On The Early Show Monday, Twitty told co-anchor Rene Syler, "We knew (the suit that was tossed) was a longshot from the beginning, but it's just hard to know what direction (to go in) and what to do when you have a victim of a crime in a foreign country. It's groundbreaking territory, for everyone, and we feel as if we have to try these avenues.

" ... I don't really know what we'll do from here. ... Now I think what we're moving into is a larger picture than Natalie. Natalie represents crimes outside our border, and also represents, to me, the challenges that a family will face should they find themselves victims of a crime in a foreign country."

To watch the Syler interview,

The case claimed van der Sloot, who was 18 at the time, was responsible for Holloway's disappearance and sought unspecified damages. Van der Sloot, who has maintained his innocence, was last seen leaving a bar with Holloway, then 18, before she vanished May 30, 2005. He and two friends were arrested a later on suspicion of involvement in her disappearance, but were released.

Twitty said she will be speaking with the attorney that filed the lawsuit, but said this case was seen as the best legal option.

Van der Sloot's lawyer, Joseph Tacopina, told The Associated Press that the college student "was elated" by the judge's decision.

"We were never afraid of the facts in this case," Tacopina said Thursday when the case was dismissed. "He did nothing to this girl. ... He's trying to get on with his life."

The lawsuit was dismissed by Judge Barbara Kapnick, who said it shouldn't have been filed in Manhattan. She rejected an argument that if the case were filed in Aruba, it would prompt a media frenzy that could interfere with the investigation.

Kapnick said taxpayers shouldn't have to pay for a case "when their interest in the suit... is so ephemeral."