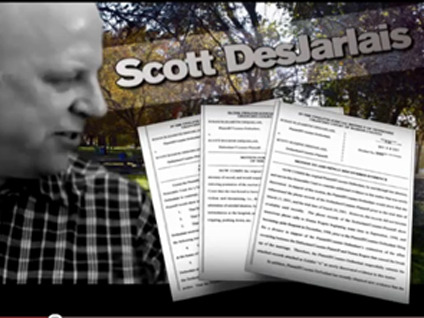 With just three weeks left to slow down the Republicans' momentum going into the midterm elections, Democrats are unleashing a wave of negative attacks to bring down their opponents. Now Democratic Rep. Lincoln Davis of Tennessee is out with what may be the nastiest ad yet of the campaign season.

Davis' new ad attacks his opponent Scott DesJarlais for his "history of attacks, violent and threatening behavior." It cites court documents from about a decade ago, when DesJarlais was in a messy divorce from his first wife.

A narrator in the ad describes how DesJarlais was cited in the documents for "firing an unloaded gun outside her bedroom door, putting the gun in his own mouth for three hours." The female narrator also notes that DesJarlais -- "a rich man -- went to court to cut his child support payments."

"It's documented. It's disturbing," the narrator says as the website Go4Truth.com is flashed across the screen. The website provides links to the court documents.

After reports surfaced last month about DesJarlais' history with his ex-wife, the Republican's campaign manager told Chattanooga Times Free Press that the charges against DesJarlais were false. He accused Davis of engaging in "gutter" politics.

"Obviously, our poll numbers have Lincoln Davis running scared if he is dredging up one-sided accusations from a decade-old divorce that were shown to be untrue," Brent Leatherwood, the campaign manager, said. "The court ruled there was no validity to any of them. Period."

The Times Free Press reported that a poll commissioned by the DesJarlais campaign last month showed Davis leading by just four points, within the poll's margin of error. CBS News has put the race for Tennessee's fourth district in the category of "Probable Democratic."

Hot Ads of the Week: Bewitched in Delaware CBSNews.com Special Report: Campaign 2010 Stephanie Condon is a political reporter for CBSNews.com. You can read more of her posts here. Follow Hotsheet on Facebook and Twitter.