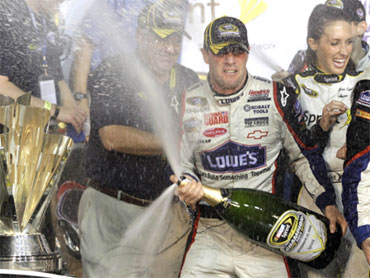 There was little recognition outside the racing world when Jimmie Johnson won his first NASCAR championship.

Same with his second, and again with his third.

Johnson, the first driver in NASCAR history to win four consecutive titles, earned mainstream recognition Monday when he was honored as the Male Athlete of the Year by members of The Associated Press.

Johnson received 42 votes from editors at U.S. newspapers which are members of the AP. Tennis star Roger Federer (30 votes) and Olympic sprinter Usain Bolt (29) were the only other athletes with totals in the double- digits.

Although Tiger Woods was named Athlete of the Decade, the golfer received only nine votes for Athlete of the Year. He was tied with NBA star Kobe Bryant and slugger Albert Pujols.

For Johnson, the first race car driver to be named the AP's Athlete of the Year in its 78-year history, the award is the validation he's been waiting for since he began his historic run in 2006.

"We'd been wondering the last few years, 'When is this going to hit?"' he said. "It seems like the answer is now. The wave is finally peaking, and we don't know where it's going to take us. The fourth-straight title takes it out of our sport and makes it a point of discussion - like, 'Wow, a race car driver won this thing."'

The 34-year-old Californian again schooled the competition, winning four of his seven races this season when the Chase for the Sprint Cup championship began in September. Two-time champion Tony Stewart dominated the "regular season," but it was Johnson and his No. 48 Hendrick Motorsports team that turned it up when the stakes were highest.

In the 10 Chase races, Johnson finished outside the top-10 only once: when he wrecked at Texas with Sam Hornish Jr. three laps into the eighth race. The crash proved Johnson's mettle, as he sat inside his car, helmet on, for more than an hour as crew chief Chad Knaus led a total rebuild of his Chevrolet so that Johnson could return to the track.

Although the 38th-place finish decimated his cozy lead in the standings, he shrugged off any potential challenge by rolling into Phoenix the next week and leading 238 of the 312 laps en route to a victory that turned the season finale into a low-key Sunday drive for Johnson.

"I'm pretty sure that dude's Superman," said teammate Mark Martin, who finished second in the standings, 141 points behind Johnson.

The march into the record books has attracted attention for Johnson far behind NASCAR's insulated garage. HBO Sports' award-winning "24/7" program has tabbed Johnson for a four-episode series that will chronicle his preparation for the 2010 season-opening Daytona 500.

And he received widespread attention earlier this month when he donated $922,000 in educational grants to 26 schools in California, North Carolina and Oklahoma.

Now comes the AP honor, which Johnson said reinforces what he's always believed - that even though he's a race car driver, he's "100 percent" an athlete.

"So to anyone who wants to go head-to-head with me in athletic ability, let's go. I talked a lot with Jason Sehorn about this, and I don't know how exactly you measure athletic ability, but I know my 5-mile run time will destroy most NFL players."

As Johnson boasted of his personal best - 34 minutes, 55 seconds - his wife, Chandra, yelled "Overachiever!" in the background. It's a bit of a joke between the two since Johnson gave a two-year commitment to a New York City-based trainer he calls "the Chad Knaus of the body."

His focus can be fanatical, but Johnson still finds time to maintain his work hard/play hard attitude - and proved it with a raucous South Beach celebration after the season-finale. The bash left him admittedly weary during the next few days, during a round of media appearances. And when the New York City mayor's office designated a "Jimmie Johnson Day" earlier this month, the champion suggested "everyone should have the day off and go have margaritas."

It's a balance between play and work that he's mastered, and firmly believes he can ride to a fifth title. Johnson recently signed a five-year deal to drive for Hendrick through 2015, and Knaus has predicted the team can keep up its rate of success over the next several years.