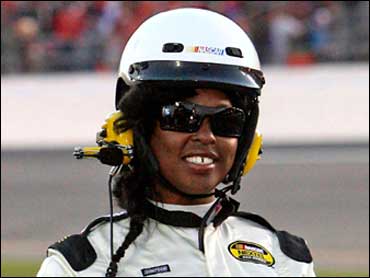 NASCAR has settled a $225 million lawsuit filed by a former official who said she was subjected to racial discrimination and sexual harassment during her two-plus years working for the stock-car organization.

The suit was settled during a Dec. 3 mediation held in New York between Mauricia Grant and NASCAR. Settlement terms were confidential. Neither side admitted liability or wrongdoing, according to NASCAR.

"We're glad to have the case settled on mutually acceptable terms," NASCAR spokesman Ramsey Poston said Thursday. "NASCAR remains dedicated to maintaining a professional work environment for all employees at all times, and we wish Ms. Grant well in her future endeavors."

Grant's attorney, Benedict P. Morelli of New York-based Morelli Ratner PC, did not immediately return a call from the AP for comment.

Grant, who is black, worked as a technical inspector responsible for certifying cars in NASCAR's second-tier Nationwide Series from January 2005 until her October 2007 termination. In the lawsuit filed in June in the U.S. District Court for the Southern District of New York, Grant alleged 23 specific incidents of alleged sexual harassment and 34 specific incidents of alleged racial and gender discrimination during her employment.

Among Grant's claims, she said she was referred to as "Nappy Headed Mo" and "Queen Sheba," by co-workers, was often told she worked on "colored people time," and was frightened by one official who routinely made Ku Klux Klan references.

Grant also said she was subjected to sexual advances from male co-workers, two of whom allegedly exposed themselves to her, and graphic and lewd jokes.

NASCAR investigated her claims and ultimately fired Tim Knox and Bud Moore, the two officials accused in the lawsuit of exposing themselves. NASCAR has declined to discuss the reasons for their dismissal. A third official, David Duke, was fired in April for reasons NASCAR said were unrelated to the suit.

NASCAR chairman Brian France vigorously defended his family business after Grant filed suit, saying she never complained to her supervisors about any of the actions she claimed after her firing.

She denied France's account, saying she followed the chain of command but stopped short of taking it to human resources when series director Joe Balash failed to address her concerns.

Grant said that two weeks after her complaint to Balash, she received a call from the human resources director reprimanding her for her behavior. She said she was fired shortly after.

In NASCAR's response to the suit, the sanctioning body claimed Grant acknowledged an understanding of NASCAR's "zero tolerance policy against discrimination and harassment in the workplace," attended mandatory training seminars on the topics in 2006 and 2007 and acknowledged her obligation to immediately report any offensive acts in accordance with written policies.

Grant claimed she ultimately was fired for that complaint to Balash. But in NASCAR's response, it claims Grant was reprimanded with a warning of termination for an altercation with a track security guard at Michigan International Speedway who had asked to see Grant's credentials as she passed through a gate.

NASCAR officials have refused to disclose why Grant was fired. But the response claimed a pattern of tardiness for which she was routinely reprimanded.

Mike Wilford, one official named in the suit, previously told The Associated Press that Grant never once complained about how she was treated in time the two spent together away from the track. Wilford also said she was a willing participant in graphic and lewd jokes and has "twisted" events to benefit her suit.