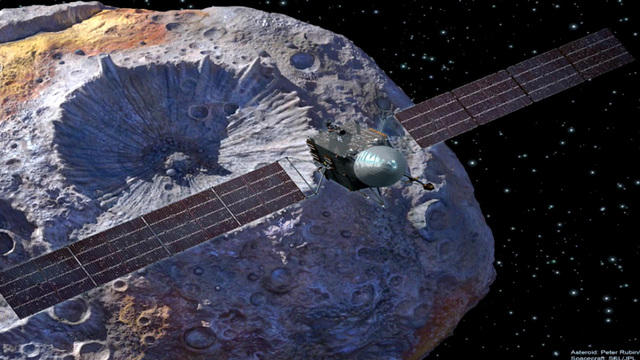 NASA is working to uncover the mystery behind an asteroid that may contain a priceless treasure trove of minerals. The space agency is planning to send an unmanned spacecraft to the chunk of metal in our solar system known as “16 Psyche.”

When the film “Armageddon” debuted almost 20 years ago, the idea of getting up close to an asteroid seemed like science fiction – not anymore.

“We’ve been to all the different planets, we’ve been to other asteroids. But we’ve never visited a body that has been made of entirely metal,” said Carol Polanskey, project scientist for the Psyche mission.

Now NASA, led by researchers at Arizona State University, plans to send an unmanned spacecraft to orbit 16 Psyche – an asteroid roughly the size of Massachusetts, made of iron and other precious metals.

The mission’s leader at Arizona State estimates that the iron alone on today’s market would be worth $10,000 quadrillion -- that’s a one followed by 19 zeroes. CBS News correspondent Carter Evans visited NASA’s Jet Propulsion Laboratory in Pasadena, California to learn what’s behind its out-of-this-world value.

“Is there any plan to take advantage of all the metal that may be on an asteroid like this?” Evans asked.

“We’re going to learn about planetary formation, but we are not going to be trying to bring any of this material back and using it for industry,” Polanskey said.

NASA did launch another mission to an asteroid last September with plans to return to Earth with a sample. And a private company called Planetary Resources is working to develop a satellite geared toward potentially lucrative asteroid exploration.

“Do you expect that people would want to go mine that some day?” Evans asked.

“Well, let’s go explore it first and see what it’s made of and then we can let people decide what they want to do with it,” said David Oh, a systems engineer for the Psyche mission project.

Once the psyche mission launches in 2023, it’ll take seven years to get to its out-of-this-world destination.

World of Weddings: In India, arranged marriages are as strong as ever