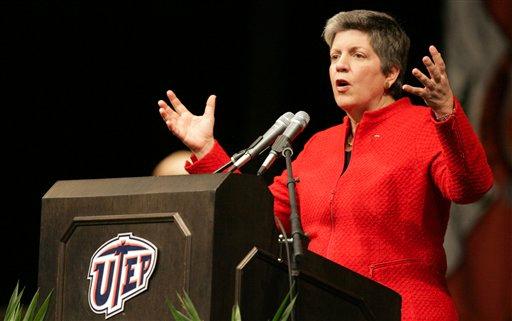 EL PASO, Texas (AP) - Homeland Security Secretary Janet Napolitano said Monday that U.S. communities on the border with Mexico are safer than most Americans believe, but also warned Mexican drug cartels they'll be "met by an overwhelming response" should they move north.

Napolitano told an audience at the University of Texas at El Paso - just across the Rio Grande from Ciudad Juarez and the unprecedented wave of drug-fueled violence engulfing it - that it's "inaccurate to state, as too many have, that the border is overrun with violence and out of control."

"This statement, often made only to score political points, is just plain wrong," said Napolitano, who was governor of Arizona before being confirmed as Homeland Security secretary in 2009.

Napolitano said violent crime has not spiked in U.S. communities across the roughly 2,000-mile border with Mexico. But the secretary also recognized that guarding against spillover from Mexican drug violence is an ongoing concern.

"Today I say to the cartels: Don't even think about bringing your violence and tactics across this border. You will be met by an overwhelming response," she said. "And we're going to continue to work with our partners in Mexico to dismantle and defeat you."

Texas Gov. Rick Perry has long criticized the federal government on border security, slamming Washington for not sending enough manpower and money to his state and saying last year that the $600 million was a good start, but not enough. Perry's office was expected to issue a statement on Napolitano's comments Monday afternoon.

A sluggish U.S. economy has reduced the number of immigrants sneaking into U.S. territory and Napolitano said Border Patrol apprehensions declined 36 percent in the past two years as a result. But she also said U.S. authorities deported 779,000 illegal immigrants nationwide in fiscal years 2009 and 2010, more than ever before.

"Let's stick with the facts and numbers when talking about where we are with the border," she said.

The statistics out of Juarez are nothing short of astounding. More than 6,000 people in the city have been killed by drug violence in the past two years alone, making it one of the most dangerous places on earth.

About 50 students protested outside the auditorium where Napolitano spoke, demanding justice for women slain in unsolved murders in Juarez, or for an end to the violence there. Others protested increased U.S. efforts to fortify its southern border at the expense of economic opportunity.

Napolitano said "a secure border does not mean a sealed border with no commerce."

During a 15-minute question-and-answer session with the audience, Napolitano said the U.S. had to do a better job stopping the flow of American guns smuggled south to fuel Mexico's drug war.

Napolitano's address was part of a yearlong nationwide campus tour that began last week. She also was heading to Dallas on Monday to discuss Super Bowl-week security ahead of Sunday's contest between the Packers and Steelers at Cowboy Stadium in Arlington.