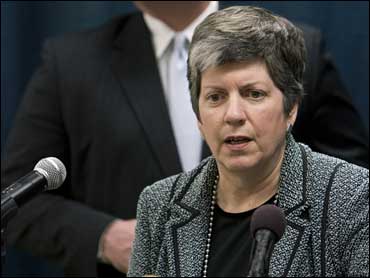 Homeland Security Secretary Janet Napolitano avoids the terms "terrorism" or "9/11" in remarks prepared for her first congressional testimony since taking office, signaling a sharp change in tone from her predecessors.

Napolitano is the first homeland security secretary to drop the term "terror" and "vulnerability" from remarks prepared for delivery to the House Homeland Security Committee, according to a copy obtained by The Associated Press.

Tom Ridge, who headed the agency when it was launched in 2003, mentioned terrorism 11 times in his prepared statement at his debut before the oversight committee in 2003. And in 2005 Michael Chertoff, the second secretary, mentioned terrorism seven times, according to an AP analysis of the prepared testimonies.

Napolitano, a former Arizona governor, instead charts a course in very different terms than Chertoff, who used law enforcement and military jargon - "intelligence," "analysis," "mission" - to describe the agency's objectives.

The department's top priorities are spelled out in legislation that created it after 9/11: preventing a terrorist attack in the United States; reducing the vulnerability for such an attack; and helping with the recovery if the U.S. is attacked.

Napolitano's prepared remarks also show her using the word "attacks" less than her predecessors, although she makes clear that the department's responsibility is protecting the nation against terrorism. She is the first secretary to use a Capitol Hill debut to talk about hurricanes and disasters, a sign of the department's evolving mission following Hurricane Katrina.

Homeland Security spokesman Sean Smith said the absence of the actual word, "terrorism" from her prepared testimony is not deliberate.

"Next time we'll send Cliffs Notes over with the testimony," Smith said. "Anyone who doesn't understand that she's talking about terrorism when she says her mission is to protect the American people from threats both foreign and domestic clearly needs a study guide."

Napolitano is not alone in her departure from terror talk.

President Barack Obama has largely avoided using the term "war on terror," although it has not been scrubbed from the White House lexicon.

The United States hasn't been attacked since 2001, and the color-coded threat alert system hasn't changed since 2006 when a U.S.-bound terrorist plot was thwarted in the United Kingdom. But intelligence officials still consider the potential for terrorist attack on the U.S. a serious concern and send messages of "not if, but when."

The committee's top Republican said he was struck that Napolitano's prepared remarks did not include terrorism, Sept. 11, new threats or a formula for distributing counterterrorism grants to states and cities - a topic near and dear to the New Yorker.

"This can't be the evil we don't speak about," Peter King said. "Any testimony on homeland security should be centered around the threat of terrorism and what we're doing to combat it."

Napolitano has talked about unifying a 218,000-strong department that includes agencies charged with protecting the country's borders, enforcing immigration laws, protecting the president, responding to disasters, keeping terrorists off of airplanes and preventing computer attacks.

Because the department is so large and has many missions that overlap other agencies', Napolitano wants to make the Homeland Security Department's role unique. She wants to focus on transportation security, guarding chemical plants and detecting weapons of mass destruction.

Security expert James Carafano calls this "a debate without a difference." All the department's missions deal with terrorism in one way or another, said Carafano, a fellow with the Heritage Foundation, a conservative think tank.

The department is six years old, and the secretary does not need to tell her employees to look for terrorists, he said. Employees know that and have been doing it.

When reporters asked last month why she doesn't talk about terrorism specifically, Napolitano said terrorism fits into what she calls "action directives" that she's issued over the past month.

In those directives, she mentions terrorism only once, and that is about a law that contains the word in its title. Her directives include reviewing the Gulf Coast recovery from Hurricane Katrina, information sharing, and immigration and border security programs.

Pressed further on the absence of terror vernacular, she said she has been working with members of President Barack Obama's national security team since the November election, and she's regularly briefed on "incidents around the world." She doesn't single out terrorism "because it's almost become part and parcel of what we do everyday."

The department's mission is straightforward, she says in her prepared testimony: "To protect the American people from threats both foreign and domestic, both natural and manmade - to do all that we can to prevent threats from materializing, respond to them if they do and recover with resiliency."