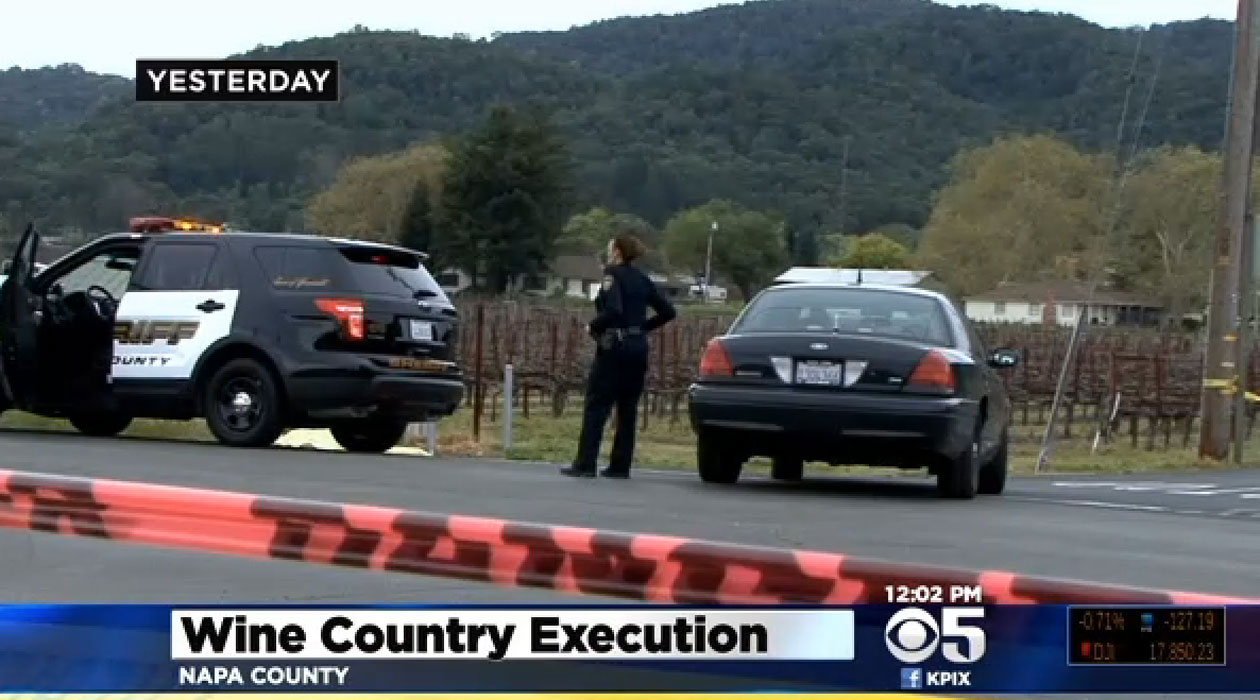 YOUNTVILLE, Calif. - A winery owner chased an investor through a Northern California vineyard and shot him in the head at close range as police approached, before leading them on a short chase that ended with his apparent suicide, authorities said Tuesday.

The investor, Emad Tawfilis, had called 911 in a panic shortly before noon Monday, saying he was running through grapevines to escape a business partner who was firing at him from behind the wheel of an SUV, the Napa County Sheriff's Department said.

As authorities headed to the scene, the owner of Dahl Vineyards, Robert Dahl, shot the fleeing investor, who fell to the ground, Sheriff's Capt. Douglas Pike said.

Dahl, holding a .22 caliber semi-automatic handgun, got out of the vehicle, "walked up to the victim and appeared to execute him just as the deputies were arriving," Pike said.

The 47-year-old vintner returned to his truck and led police on a brief chase around Yountville. Authorities lost sight of him in the woods after he plowed through a gate. They found him minutes later, however, dead in the SUV, apparently from a self-inflicted gunshot wound, Pike said.

The 48-year-old Tawfilis was killed near Highway 29, gateway to the Napa wine region.

Dahl's attorney, Kousha Berokim, said the two men had been discussing a business disagreement. "The meeting was peaceful and held to develop a framework to resolve their dispute," he said. "There was certainly no indication of violence."

Dahl and Tawfilis had filed lawsuits against each other over a $1.2 million investment. Dahl said the interest Tawfilis was charging on the loan was illegally high. Tawfilis, meanwhile, said Dahl misused funds and fooled him into investing in defunct companies.

Berokim and David Wiseblood, Tawfilis' lawyer, participated in the settlement talks by phone. After about 20 minutes, the parties agreed to take a short break, and the lawyers hung up.

Shortly afterward, however, Tawfilis called police to the winery, saying he had been shot and was fleeing for his life.

Berokim said the shooting "was out of character" for Dahl.

Tawfilis, who lived in Los Gatos, "was a bright and principled man," his lawyer David Wiseblood said. "He went up to Napa to resolve this thing so he could get on with his life. Instead, he lost his life."