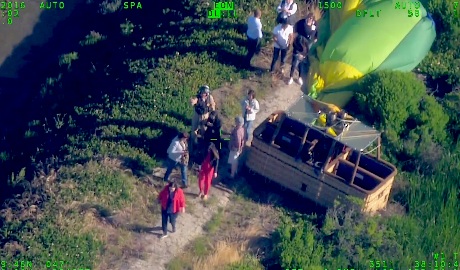 NAPA, California -- Tourists who were taking in the scenic Napa Valley on a hot air balloon ride Tuesday had their journey turn into a rescue mission when the balloon went off course and made an emergency landing near the Napa River, CBS San Francisco reported.

Lipsey said as CHP helicopters were out training, he noticed something colorful from the flight hanger.

"We looked over there, saw a hot air balloon that was pretty far south of where we normally see them," he recalled.

A helicopter found the balloon on a remote levee, miles off course, near the Napa River. The pilot told Lipsey he didn't have enough fuel to lift off.

"The winds were kind of shifting all over as we were landing, so I think it was just a really strange day for winds and maybe caught them off guard," Lipsey said.

The balloon belongs to Napa Valley Balloon Inc. Representatives told CBS SF the people on the balloon ride were tourists that were part of a Robert Mondavi wine tasting trip.

The helicopter had to make multiple trips to rescue the 16 tourists and the pilot.

One of the tourists posted on Instagram a selfie from the chopper.

"I know they were taking a lot of selfies and videos of us flying over there so I am sure they got good memories there," Lipsey said.

Napa Valley Balloon Inc. said the strong winds forced their pilot to land on the levee, but no one was ever in danger.