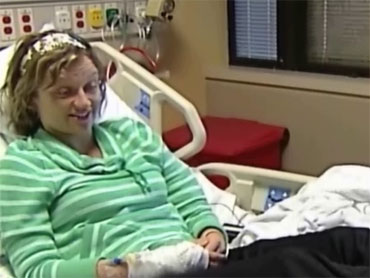 Alyson Myatt said her own safety never crossed her mind.

After waking to a loud boom and realizing smoke detectors were going off in the Shelbyville home where she worked as a nanny early Tuesday morning, all she knew was she had to get to the 5-year-old boy she cared for.

And she did, after walking barefoot through a flaming hallway and carrying the boy to safety from the house on Goldenrod Court. "I didn't even think about me getting burned," Myatt said. "I care for the kid a lot. I really do."

She was new on the job -- she'd only been working there two months, reports CBS News Correspondent Whit Johnson.

Speaking from a bed in University Hospital's burn unit Wednesday evening, Myatt, 22, said she had been working as a live-in nanny for the family only two months.

Both her feet and her right hand were heavily bandaged after suffering severe burns, and she said it was too early to guess how long her hospital stay might be or what her recovery might entail.

Still, looking back, Myatt said she felt lucky. "I feel very blessed, it could have been a lot worse," she said.

The boy's father, J.B. Hawes, who was out of town, rushed back to Louisville.

"We went to the hospital from the airport, to see Ali," he told CBS affiliate WLKY-TV, choking back tears. "When someone sacrifices, takes a chance with their life, for your son, it's pretty amazing.

"He had about a minute to live. Most people wouldn't have done what she did. I'll owe her a debt for the rest of her life, because there's no way to ever repay something like that."

Myatt said she's spoken to the boy on the phone long enough for him to tell her that he misses and loves her.

She downplays any heroics that others attribute to her. "I just did what I would hope every human being would do," Myatt said.

"She did it and I bet a lot of people wouldn't," he said.

He added that in his 20-plus years as a firefighter, the courage Myatt showed stands out.

After waking up around 6 a.m. Tuesday, Myatt raced from the basement bedroom, where she slept, to the main floor of the house to check on the boy.

She found a hallway bathroom engulfed in flames, and the fire had spread across the hallway carpet leading to the boy's bedroom.

She called his name and the boy answered, shouting that he was in the room hiding under the covers.

Myatt ran barefoot across the flames into the room and snatched up the screaming boy.

Though she didn't feel any pain, she said, something felt wrong, like she was "walking on goo."

"It was all the skin, my feet were just burned off," Myatt said through tears.

Myatt carried the boy back through the burning hallway and took him outside, where she jumped into a van and drove them both to a neighbor's house, telling the boy on the way that he would have to run to the home and ring the door bell until someone answered.

A neighbor came to the door, called the fire department and drove Myatt to a Shelbyville hospital.

When Shelbyville Fire & Rescue arrived on scene minutes later, the attic of the home and entire front bedroom where the boy slept were engulfed in flames, said Tucker.

If the boy had still been inside, it would have been too late, Tucker said.

Tucker said the fire started in a ventilation fan in a hallway bathroom that Myatt said had been smoking three hours earlier when she first heard smoke alarms.

At that time, Myatt went to see what was going on and said she threw water on the smoking fan, which seemed to put out any fire.