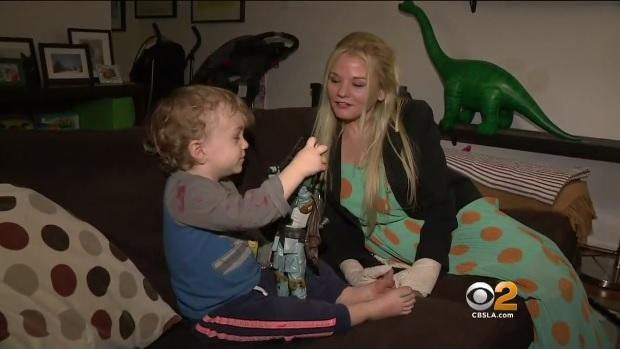 LOS ANGELES -- When Courtney Davis hired Caroline Maurer to nanny for her, Davis thought she hit the jackpot.

"I would always joke that Caroline was Mary Poppins," Davis told CBS Los Angeles. "I would always say she's better than we are. We were first time parents and we learned so much from her. Truly, I felt we lucked out."

Maurer went from Mary Poppins to super nanny seven months ago when she pushed 2-year-old Fox out of the way of an oncoming car during a walk in their Atwater Village neighborhood.

"I pushed him as hard as I could while yelling at the guy to stop, which he didn't, and he plowed into my hands and threw me back, and my hands were crushed," Maurer said.

For Maurer, it meant losing a lot of the mobility in her hands because they were smashed by the car. Fox was unharmed.

"He was screaming, 'Nanny Caroline, I love you,' which was breaking my heart because I couldn't hold him," she said.

Maurer and Davis explained what happened in a video Davis made to help her nanny raise money. They say the driver's insurance and Maurer's insurance cover little, and she can't work.

"I can't hold a pen properly and I also don't have any sort of grip," Maurer said.

She's hoping to get 80 percent of mobility back in her hands. Maurer says she's not even close.