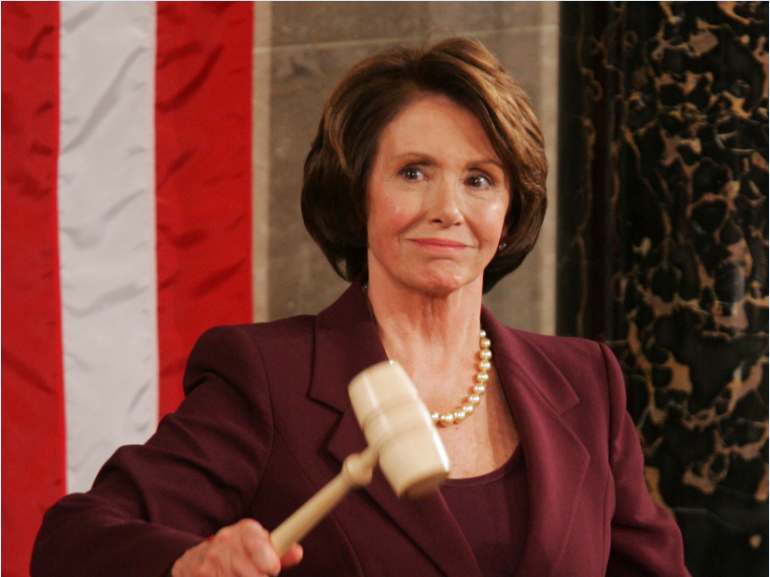 The first woman speaker of the House -- now Minority Leader Rep. Nancy Pelosi, D-California -- commemorated women's "firsts" by donating items from her Jan. 4, 2007 swearing in and speech as speaker of the House to the Smithsonian National American History Museum Wednesday.

"I'm really humbled by my colleagues who had the courage to elect the first woman speaker of the House -- that was no small feat -- bringing us closer to the ideal of equality that is America's hope and heritage," Pelosi said at the ceremony.

Pelosi, who served as the 52nd Speaker of the House, from 2007 to 2011, donated the lacquered-maple gavel given to her, the burgundy skirt suit she wore to her swearing in and the original speech she gave on January 4, 2007. And she gave the vote tally -- "it's all about a vote," Pelosi laughed. She remains the woman who has reached the highest political rank of any woman in U.S. history.

In her 2007 acceptance speech, Pelosi talked about the "marble ceiling" that had been broken with her election as speaker.

It is an historic moment for the Congress, and an historic moment for the women of this country. It is a moment for which we have waited over 200 years. Never losing faith, we waited through the many years of struggle to achieve our rights. But women weren't just waiting; women were working. Never losing faith, we worked to redeem the promise of America, that all men and women are created equal. For our daughters and granddaughters, today we have broken the marble ceiling. For our daughters and our granddaughters, the sky is the limit, anything is possible for them.

Democrats lost the majority in 2010, but Pelosi held onto the top Democratic leadership role. She has been elected leader eight times by House Democrats.

Pelosi's dress joins the garb of other women firsts at the Smithsonian -- astronaut Sally Ride's spacesuit and Supreme Court Justice Sandra Day O'Connor's robe, among others.