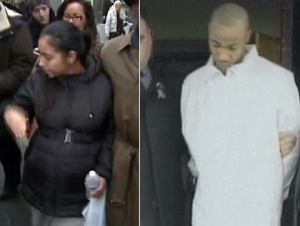 (CBS/AP) NEW YORK - A former New York jail guard who was impregnated by an inmate convicted of killing two police officers has lost custody of her baby.

According to court records, Nancy Gonzalez lost her parental rights after the inmate's relatives plied her with alcohol at two meetings over the summer.

Gonzalez, who has pleaded guilty to charges she had sex behind bars with Ronell Wilson, was prohibited from drinking as a condition of her bail.

The New York Daily News reports that Ronell Wilson's family wanted Gonzalez to testify about the baby at his sentencing hearing in an effort to help him avoid the death penalty but Gonzalez refused.

Wilson was sentenced to death for killing the officers' during a buy-and-bust in 2003.

Gonzalez faces up to 16 months in prison. According to the paper, the baby has been temporarily placed in the foster care of Gonzalez's aunt.

Complete coverage of Ronell Wilson and Nancy Gonzalez on Crimesider