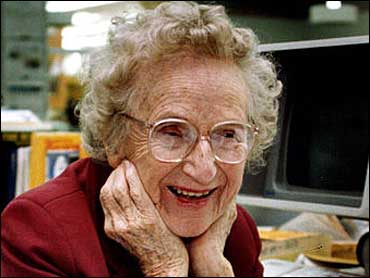 Benson, 96, fell ill at her desk at the Toledo Blade newspaper Tuesday and later died at a hospital.

Benson was a journalist for 58 years and wrote more than 130 books, including the Penny Parker mystery series. She also penned countless short stories, but is best known for creating Nancy Drew, who captivated generations of girls.

The series is still in print and has sold over 200 million books in 17 languages. Dozens of ghost-writers followed Benson, also writing under the name Carolyn Keene.

Nancy Drew buffs have said Benson's books allowed girls and young women to imagine anything could be possible at a time when females struggled for any sense of equality.

"I wanted to do something different," Benson once said of the books she wrote. "The heroines of girls' books back then were all namby- pamby. I was expressing a sort of tomboy spirit."

"I always knew the series would be successful," she said in a December interview with The Associated Press. "I just never expected it to be the blockbuster that it has been. I'm glad that I had that much influence on people."

Benson, known as Millie to friends and fans, wrote 23 of the 30 original Nancy Drew stories. She was paid $125 per book and never collected royalties from the books, movies and board games.

She was bound by an agreement with the publisher not to publicly reveal her identity as the series author, but it became known in 1980 when she testified in a court case involving Nancy Drew's publisher.

Harriet Adams, daughter of the original publisher Edward Stratemeyer, took over the series and directed writers to make the stories shorter and faster-paced in the 1950s. Adams died in 1982, and the syndicate sold Nancy Drew to Simon & Schuster.

Semi-retired in January, Benson wrote that "going to work was a way of life for me and I had no other."

"Millie Benson was one of the greatest women writers and journalists of the 20th Century," said John Robinson Block, editor-in-chief and publisher of the Blade. "She was gutsy and daring, a living embodiment of her Nancy Drew heroine."

In an interview, Benson said she never read her fictional stories after they were finished, "because the minute I do I'm going into the past, and I never dwell on the past."

Benson frequently traveled to Mexico and Central America to indulge her interest in Mayan culture, paddling a dugout canoe into the jungle, and became a pilot in her 60s.

Through it all, she was dedicated to reporting and writing the news.

Her columns reflected on both local and global issues, with a personalized focus on the struggles of the elderly -- "people who are willing to go out and do things," she said.

"I always wanted to be a writer from the time I could walk," she said. "I had no other thought except that I wanted to write."

She wrote children's stories when she was in grade school and won her first writing award at 14.

In a way, she was a lot like the character she made famous - independent and adventurous.

Benson was the first person to receive a master's degree in journalism at the University of Iowa in 1927, according to the school.

She was introduced to journalism through her first husband, Asa Wirt, who worked with The Associated Press. In 1944, Benson began working at the former Toledo Times and later at The Blade.

Three years after his death in 1947 she married newspaper editor George Benson, who died in 1959.

She is survived by her daughter, Peggy Wirt, of Logansport, Ind.

Benson recalled her lifelong love of books and libraries in her final column published in The Blade on Wednesday.

"I consider it an honor to have been born near the turn of the 20th century, at about the time when public libraries were first coming into popular use," she wrote.