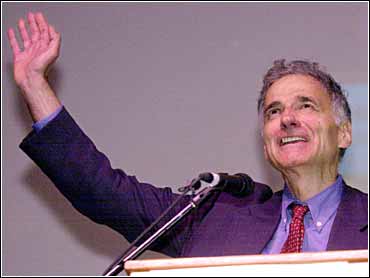 Ralph Nader rallied crowds with his usual anti-corporate, pro-labor stump speech, but the Green Party presidential nominee could have left the talking to the celebrity friends who joined him on the road in the industrial Midwest.

Filmmaker Michael Moore and talk show host Phil Donahue echoed Nader's message, point by point, prior to introducing him Wednesday. First, there was the outright dismissal of the theory that voting for the longshot candidate would only siphon support away from Democrat Al Gore and deliver the presidency to Republican George W. Bush.

Then, there's the debate issue. Nader wants to participate in next month's presidential debates, which require national poll support of 15 percent. Recent surveys give him about 3 percent.

“This principled man must absolutely be on the debates,” Donahue told the same crowd. “If Ralph is not on the debates, we're going to have far too many issues that won't even come up.”

Nader, practically conceding that his chance of winning the presidency is a longshot, characterized his campaign as a “party-building effort” that will continue to grow even after the election.

“After November, we'll emerge as a significant third party that will be a burgeoning watchdog over the two-party system,” he told hundreds of students who greeted him at the Student Union of the University of Wisconsin-Milwaukee. Later, he advised supporters to vote their conscience and encourage their friends to do the same.

“The most powerful media is word of mouth - very powerful and lightning fast,” he said.

Nader took to the union-heavy states to launch his “nonvoter tour” hoping to revive his campaign by targeting young and disillusioned Americans. Both Moore and Donahue will continue to join Nader on his next stops in Michigan and Minnesota.

Among the Michigan stops is Flint, Moore's hometown and the city that brought both him and Nader their first notoriety. Nader's high-profile career as a consumer advocate got its start with his 1965 book “Unsafe at Any Speed,” a harshly critical look at U.S. auto manufacturing that focused on the General Motors Corp. Corvair. Moore's 1989 documentary “Roger & Me” assailed the company's actions in closing its Flint plant.

“This will be the first time Ralph and I will appear in the hometown of General Motors on a stage,” Moore noted, saying he was “very honored and thrilled” to be a part of the campaign.

Donohue said he was a radio reporter in 1965 when he first met Nader.

“I just couldn't get over hat this one man did to the most powerful, largest, richest corporation on Earth,” he said. Nader went on to be the most frequent guest on Donahue's television talk show, which aired for 29 years.

“I've retained the admiration that developed 35 years ago for this man who I happen to believe is America's most important private citizen of the 20th century,” he said.

Nader began his Midwestern tour in Milwaukee and then headed to Madison for a pair of fund-raisers. The first, a finger-food party costing $100 per person, came just before a much cheaper event this one for $10 a piece that drew a standing-room only crowd of about 2,000 at the nearby Orpheum Theater.

Wisconsin and Michigan, two important battleground states, are considered toss-ups between Gore and Bush. Nader has a strong following in Michigan, and his appearance on that state's ballot initially scared Democrats who feared he would take votes away from Gore. But Nader's poll ratings have slipped in recent months.