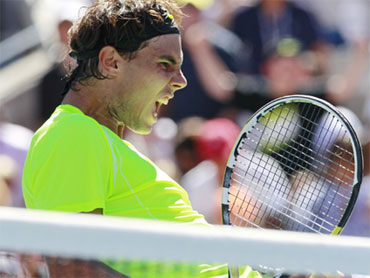 Top-seeded Rafael Nadal blew through No. 12 Mikhail Youzhny 6-2, 6-3, 6-4 to reach his first U.S. Open final on Saturday and set up the first half of his sport's dream matchup - Nadal vs. Roger Federer for a Grand Slam title.

Nadal is 5-2 against Federer in Grand Slam finals but they have never met in Flushing Meadows, where Federer - who played No. 3 Novak Djokovic in the later semifinal - has five championships but Nadal had never even reached the final.

"For me, is a dream," Nadal said. "I'm going to play for the first time in the final here, in the biggest center court in the world."

Looking to complete the career Grand Slam, Nadal came to the U.S. Open as fresh, both mentally and physically, as he's ever been. He also came with a serve that's been either revamped or tweaked - or something in between - and it has made a difference, allowing more easy points for tennis' ultimate grinder. Nadal won 13 of his 14 service games against Youzhny and, through six matches, has been broken only twice in 91 games.

He still hasn't lost a set, either, and Youzhny barely pressed him.

The Russian, playing in his second career Grand Slam semifinal, was coming off a 4½-hour, five-set win over Stanislas Wawrinka of Switzerland in the quarterfinals. He came in with a respectable 4-7 win-loss record against Nadal, but from the beginning of this meeting, he never looked like he had the legs to position himself for an upset.

There was a brief delay midway through the second set while Nadal had his left foot retaped. A slight opening? Well, no. Nadal came out and held the next service game at love, then pinned Youzhny deep, forcing the Russian to hit a forehand long on break point to make it 5-3. He said the new tape job was no big deal.

Nadal and Youzhny played on a day where the flag above Arthur Ashe Stadium flew at half-staff, on the nine-year anniversary of the Sept. 11 terrorist attacks across the river in Manhattan. In his post-match interview on court, Nadal expressed his "support for the victims of 9-11 and their families."

"This is a very special day for everybody," he said.

On a day when the wind that has plagued the tournament finally eased up, Youzhny got his single break of serve to pull to 4-4 in the third set. Just as quickly, Nadal broke back, then served it out for the win and found himself one victory away from becoming the seventh man to round out a collection of major championships. He has eight so far: five at the French, two at Wimbledon and one at the Australian in 2009, where he beat Federer in five sets - the last time they met in a Grand Slam.

Nadal is seeking to become the first man since Rod Laver in 1969 to win the French, Wimbledon and the U.S. Open in the same year.

Federer sought to make his seventh straight U.S. Open final and brought a 10-5 career record against Djokovic into their semifinal, including a straight-set win in last year's semis.

Federer also advanced to the semifinals without losing a set.

After the Federer-Djokovic match, No. 7 Vera Zvonareva was scheduled to play No. 2 Kim Clijsters in the women's final, with Clijsters going for back-to-back titles.

At least 125 of the iconic clothier's retail locations will remain open as part of the deal.