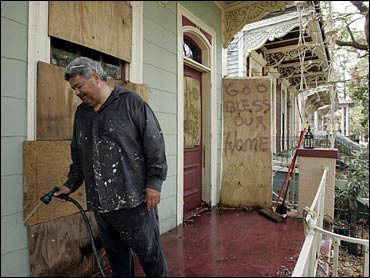 Residents of one New Orleans neighborhood were invited to come home Monday and "help us rebuild the city."

The mayor's office announced that residents of Algiers, which largely escaped the flooding brought by the twin onslaughts of Hurricanes Katrina and Rita, would be able to return starting at 10 a.m. Algiers has electricity, water and sewer service.

In addition, business owners in the Central Business District, the French Quarter and the Uptown section would be allowed in to inspect property and clean up.

Other areas of the city remain under a mandatory evacuation order, the mayor's office said.

"With Hurricane Rita behind us, the task at hand is to bring New Orleans back," Mayor Ray Nagin said. "We want people to return and help us rebuild the city. However, we want everyone to assess the risks and make an informed decision about re-entry plans."

Algiers, a neighborhood of 57,000 people across the Mississippi River from the French Quarter, also was the first section to reopen to residents last week, before the approach of Rita forced the city to halt its plan to reopen some neighborhoods.

The French Quarter itself should see close-to-full

Nagin said a curfew would be in place from 6 p.m. to 8 a.m. and warned there were limited police and firefighting services and no critical care hospital services.

Most of the hospitals in the city are "a mess" and not one is open, CBS News correspondent Sharyn Alfonsi reports. Only in the Algiers section was the city water fit for drinking or bathing. Residents returning were allowed to travel only within their ZIP codes.

Some residents of nearby St. Bernard Parish, heavily damaged by Katrina's flooding, also tried to return to the their homes Monday. They ran into a roadblock on Interstate 10 before daybreak and had a confrontation with police that backed up traffic for miles, WWL-TV reported.

State Trooper Lt. Chris Bodet said officers were trying keep the roads open for emergency vehicles, and had not been told to expect returning residents for a day or two.

Joseph DiFatta Jr., a St. Bernard Parish councilman, said the Parish Council had an agreement with Nagin's office to allow residents into the parish beginning at 6 a.m.

On Sunday, an Army Corps of Engineers spokesman said areas newly flooded this weekend by Rita could be pumped dry within a week after levee damage is repaired, far sooner than initially predicted.

But the levees might be beyond repair, Alfonsi reports for The Early Show. In fact, Louisiana Gov. Kathleen Blanco has asked for $20 billion to completely rebuild the city's levees. She says sand bags simply aren't enough.

"Why would you rebuild a $50 billion worth of housing only to have it flooded again in the same situation?" she asked.

Federal officials were coordinating with city officials on the effort to allow evacuated residents to return to dried-out areas. The plan is to reopen dried-out neighborhoods inhabited by 250,000 to 300,000 of the city's half-million residents.

"The city is not going to survive unless it's got people in it," Kappa Horn said Sunday as she served up burgers to a steady stream of police officers and others who came her Slim Goodies diner in the Garden District. "I want to be part of rebuilding my city."

Most of the city was spared significant new damage when Rita struck near the Texas-Louisiana line, but the hurricane's rain and storm surge partially breached levees along the Industrial Canal, causing renewed flooding in the already-devastated Ninth Ward. That is the section of east New Orleans that was submerged by Katrina and pumped dry just days before the second big storm.

The Army Corps of Engineers worked to pile rocks and sandbags in the breaks. Workers believe that once the breaches are closed, the Ninth Ward can be pumped dry in a week, said Mitch Frazier, a spokesman for the Corps.

Nagin has suggested that only people who are mobile. Alfonsi reports that children and the elderly are not being encouraged to return yet. "That's going to be the reality of New Orleans moving forward," he said.

Coast Guard Vice Adm. Thad Allen, who is in charge of the federal disaster effort in the city, sounded a further cautionary note.

"Where the mayor needs some thoughtful approach to is the areas that have been re-flooded and the areas that may remain uninhabitable for safety, health and other reasons," the admiral said Sunday on ABC's "This Week." "And I think a timetable associated with that still needs to be worked out."

He did agree with allowing business operators to return to unaffected areas and letting residents return to Algiers.

A few evacuees returned to the city Sunday aboard a flight from Cincinnati.

"You go from joy to disbelief to sadness to just being tired, to just wanting to go home," Paul Jordan said. "Our goal is to help rebuild the city, and we're going to do whatever we can."