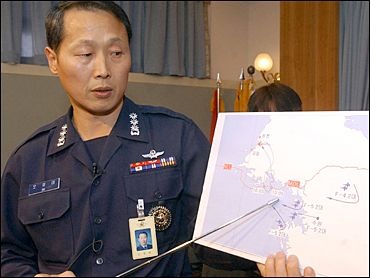 The incident came three days after North Korea threatened to abandon the armistice keeping the peace between the two Koreas if the United States went ahead with sanctions or other actions against the communist country.

The North does not recognize the so-called Northern Limit Line maritime border that was drawn up by the U.S.-led U.N. Command at the end of the 1950-53 Korean War, and the border has been a site of tensions in the past.

A North Korean MiG-19 jet fighter crossed the border at 10:03 a.m. and headed back into communist territory two minutes later. This was the first incursion by North Korean military jet since 1983.

"We will strongly protest this provocation," Lee said.

A South Korea anti-aircraft missile unit based near Incheon, a seaport west of Seoul, went into battle position. At the same time, two South Korean F-5E jets went to the scene to try to intercept the North Korean intruder, Lee said.

In June last year, warships of the two Koreas clashed near the western sea border. One South Korean warship sank, killing six sailors and wounding 18 others. North Korea admitted that it also suffered casualties but did not say how many.

In 1999, a series of North Korean incursions across the western sea border touched off the first naval clash between the sides since the war. One North Korean boat sank, and about 30 communist sailors were believed to have died. Several South Koreans were injured.

Tensions have been high on the Korean Peninsula since the United States said in October that the North admitted having a secret nuclear weapons program. Pyongyang has since pulled out of the Nuclear Nonproliferation Treaty.