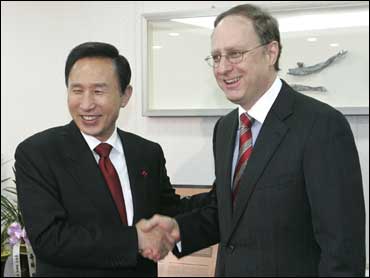 North Korea is likely to miss a year-end deadline for disabling its nuclear facilities, the main U.S. envoy to South Korea said Friday, while expressing optimism Pyongyang will still eventually fulfill its promises.

"We may not meet the end of year deadline but I think we'll get there in the end," Alexander Vershbow told a forum.

The North had promised to disable its main nuclear facilities at Yongbyon, north of Pyongyang, by the end of the year and also make a complete declaration of its atomic programs for eventual dismantlement. In exchange, the impoverished country is receiving energy aid and the U.S. has said it would remove the North from terrorism and sanctions blacklists.

However, diplomats have said the North would likely not be safely able to complete one key disablement step - removing the fuel rods from its reactor - for several months.

"I'm optimistic we'll complete the current stage which calls for the complete disablement of the (North's) facilities at Yongbyon and the provision of complete and accurate declaration of all North Korean nuclear programs and materials soon," Vershbow said.

"We still have a long way to go to achieve the ultimate goal of the complete denuclearization," he said.