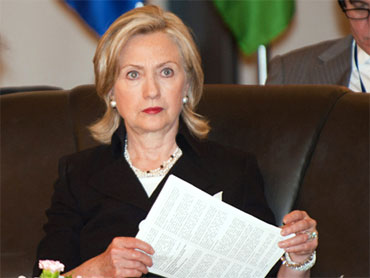 North Korea inflamed already-high tensions in the region over the deadly sinking of a South Korean warship by threatening the United States and South Korea on Friday with a "physical response" if they carry out military drills as planned on Sunday. The U.S. refused to back down, saying any new talks with the North are unlikely in the current standoff.

The latest threat came four months after the sinking of a South Korean warship that killed 46 sailors. The North has been blamed, but vehemently denies any involvement.

In Vietnam for a Southeast Asian regional security forum, U.S. Secretary of State Hillary Rodham Clinton and a North Korean official traded barbs over the ship incident, the upcoming military drills and the imposition of new U.S. sanctions against the North.

Meanwhile, the U.S.-led military command monitoring the cease-fire on the Korean peninsula confronted the North about the March sinking of the Cheonan, calling it a violation of the armistice that ended fighting in the 1950-53 war. Colonels from the U.N. Command, who met at the border with counterparts from the North's army, reminded them of the U.N. Security Council order to honor the truce. Officers also proposed a joint task force to discuss the "armistice violations," the military commission said in a statement.

A team of international investigators concluded in May that a North Korean submarine fired the torpedo that sank the Cheonan. The U.N. Security Council approved a presidential statement earlier this month condemning the incident, but did not directly blame Pyongyang.

The U.N. Command, however, blames North Korea for the incident and considers it a violation of the cease-fire, a command official said Friday, speaking on condition of anonymity because the results of the command's own investigation have not been released.

At the Association of Southeast Asian Nations meeting in Hanoi, North Korean spokesman Ri Tong Il repeated Pyongyang's denial of responsibility for the ship sinking and said the upcoming military drills were a violation of its sovereignty that harkened back to the days of 19th-century "gunboat diplomacy."

The exercises will be "another expression of hostile policy against" North Korea. "There will be physical response against the threat imposed by the United States militarily," Ri told reporters.

Clinton responded by saying the U.S. is still willing to meet and negotiate with the North, but that this type of threat only heightens tensions. She added that progress in the short term seems unlikely, given the circumstances.

"It is distressing when North Korea continues its threats and causes so much anxiety among its neighbors and the larger region," she told reporters. "But we will demonstrate once again with our military exercises ... that the United States stands in firm support of the defense of South Korea and we will continue to do so."

Shortly before Ri spoke, Clinton had lashed out against belligerent acts by the North, warning that it must reverse a "campaign of provocative, dangerous behavior" if it wants improved relations with its neighbors and the United States.

She said stability in the region, particularly on the Korean peninsula, depends in large part on convincing an "isolated and belligerent" North Korea to alter course and return to nuclear disarmament talks which it pulled out of last year.

Members of the U.S. and North Korean delegations did not meet at the annual ASEAN Regional Forum, which has in the past been a venue for rare talks between the two sides. The 27-member bloc - 10 members of ASEAN and countries with major interests in the area like the U.S., China, Japan, North and South Korea and Russia - expressed "deep concern" over the Cheonan's sinking in a joint statement, a weakened version of an earlier ASEAN statement.

On Wednesday, Clinton announced in the South Korean capital that the U.S. would slap new sanctions on the North to stifle its nuclear ambitions and punish it for the sinking of the South Korean ship. The penalties will target the country's elite by taking aim at illicit activities, such as counterfeiting cigarettes and cash and money laundering.

On Friday, the European Union said it will also consider imposing new sanctions on the North.

In addition to North Korea's behavior and its nuclear program, Clinton raised concerns about potential atomic collaboration between the North and Myanmar, also known as Burma, which is restricted by U.N. agreements.

Numerous reports in past months have suggested that Myanmar's military rulers are attempting to develop nuclear weapons with North Korean help.

Clinton's comments on Myanmar echoed those of previous U.S. administrations, but they come as President Barack Obama has made a push for expanded engagement with Southeast Asia.

In an indication of that increased involvement in the region, Clinton said "the United States has a national interest" in resolving conflicting claims over the Spratly and Paracel island chains in the South China Sea, particularly between China and Vietnam.

She said the disputes interfere with maritime commerce, hamper access to international waters in the area and undermine the U.N. law of the sea.