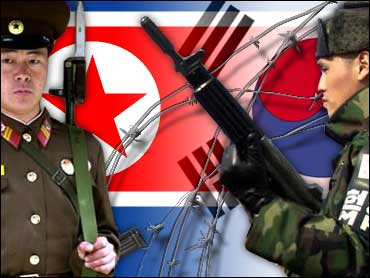 North Korea urged its military and people to be ready for war, the South Korean news agency Yonhap reported Wednesday quoting a statement from the North Korean government.

"The war racket is creating an extremely tense situation where the United States can launch a pre-emptive attack on us at any time," the North Korean statement said, according to Yonhap.

"This requires our military and people to mobilize all our resources to be fully ready for any contingencies," it added.

The North Korean statement did provide further details. Washington has repeatedly said it has no plans to invade the isolated country.

The statement came hours after Roh Moo-hyun, was sworn in as South Korea's new president.

The gunfire honoring Roh as he was sworn in was symbolic.

But North Korea jangled nerves with a real weapon firing a short-range missile about 40 miles into the sea just hours before the inauguration.

And there was more from the North Korean propaganda machine, reports CBS News Correspondent Barry Petersen -- a claim that U.S. spy planes are collecting data for what the North called a prelude to war.

"This is a premeditated move to find an opportunity to mount a pre-emptive attack on the DPRK," said the North's official Korean Central News Agency. DPRK stands for Democratic People's Republic of Korea.

In Washington, the Pentagon denied that a spy plane intruded on North Korean airspace.

"There is no truth to these claims," Defense Department spokesman Lt. Cmdr. Jeff Davis said.

"We routinely fly intelligence surveillance and reconnaissance missions," he added. "We don't comment on the specifics of these missions, but all flights follow approved routes in international or Republic of Korea (South Korean) airspace."

KCNA said "U.S. imperialist war hawks" sent a RC-135 strategic reconnaissance plane into its territory on Monday. The agency said the plane had made similar intrusions in recent days.

There was a time when that kind of saber rattling was dismissed because the U.S. and South Korea presented a united front. And that's the kind of front Secretary of State Colin Powell wanted to show with his visit to South Korea for the inauguration. But as the crisis gets worse, that front is starting to crack.

The country's new president won the election promising to stand up to an America that people here say still treats South Korea like a poor relative - not a successful nation with a world-class economy. And he recently said his country would no longer take any "bossing" from the U.S.

And Roh opposes the option of using American force against the North despite lobbying today by the Secretary of State.

"What I said to President Roh is that you cannot ever remove an option that is available to you," said Powell.

Which may be why North Koreans are drilling for air raids. Powell keeps talking about diplomacy, but the North keeps hearing threats of war.

Earlier, Powell downplayed the importance of the missile test. He said U.S. officials had heard that such a launch was impending and said it was "not surprising" and "fairly innocuous."

A North Korean diplomat at a summit of non-aligned nations in Malaysia downplayed the launch, saying "What big incident? Everybody has missiles."

Petersen reports there is some suspicion the test was just part of winter military exercises, but it did seem to be some sort of message of military might. However, the missile's range of 40 miles meant it could not have reached Japan.

Despite the reassurances, the missile launch sent a new wave of anxiety through Asia and sent Tokyo stock prices into a plunge.